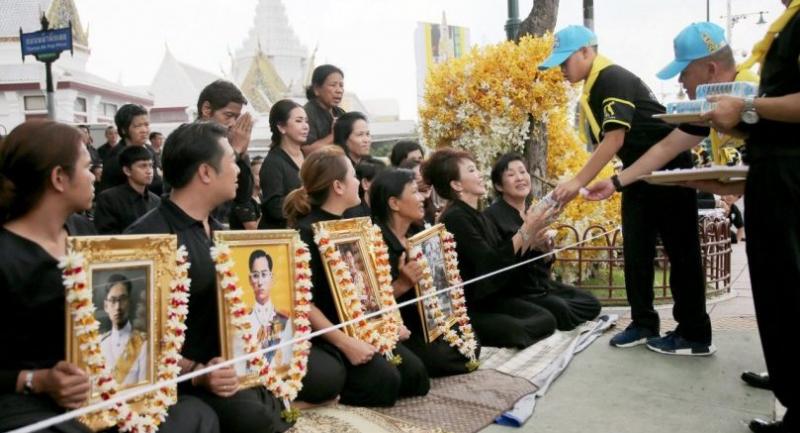 The prince was dressed in the volunteer uniform of a black t-shirt with a blue gap and a yellow scarf. His cheerful spirit brought joy to those volunteers for the Royal Cremation ceremony.

He later went to pay respect at King Chulalongkorn’s monument within the compound and to the principle Buddha image, Phra Buddha Aungkeeros, inside the shrine. He presented offerings to the Supreme Patriarch, His Holiness Ariyavongsagatanana. As the temple ground of Wat Rajabopidh is also the Royal Cemetery, Prince Dipangkorn went on to pay respect to the royal ashes of the Mahidols – Prince Mahidol Adulyadej, Princess Srinagarindra and Princess Galyani Vadhana – and the Kitiyakara royal family. He then cleaned the windows of the Rangsri Vadhana Memorial, and the gate’s Memorial of Queen Sunanda Kumariratana, where the queen’s royal relics are kept. He also helped paint the wall of the temple.

Next he went to City Pillar Shrine Lak Muang and gave food and drinks to members of the public who were camped along the roads of the Royal Cremation ground, and later visited the Royal Crematorium of His Majesty King Bhumibol Adulyadej. Prince Dipangkorn disclosed during his last volunteering stint, at Wat Muttothai in Germany, that, when he came to Thailand, he would like to follow his father, His Majesty King Maha Vajiralongkorn’s royal wishes, as well as those of his grandfather, King Bhumibol, to do good deeds for other people.