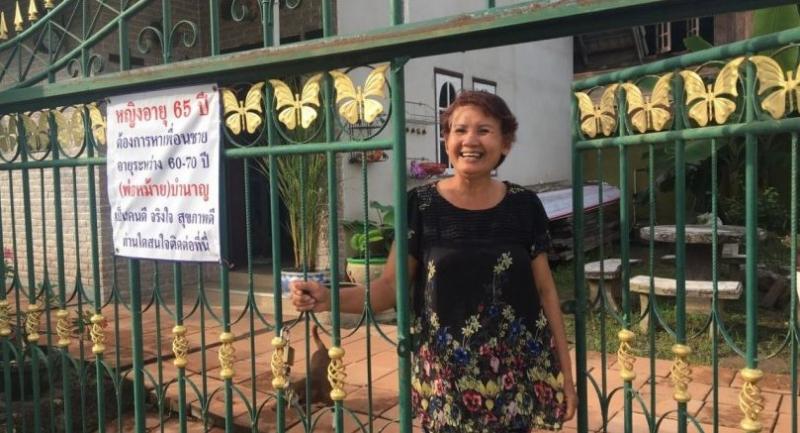 A 65-year-old woman in Ubon Ratchathani’s Pibul Mangsahan district, who has put up a sign on the gate of her house seeking a pensioner boyfriend, on Tuesday confirmed that she had not been successful, despite speculation on social media.

Divorcee Sompong Chomphupraphet said there had been a misunderstanding and the man who appeared with her in a photo on the Facebook page “Me Dan Bok Duay Rayong” on Sunday was not her new boyfriend.

“Even though I am old, I won’t fall in love with anyone in a day,” she said. The man in the picture, whose name she said she did not know, had showed up at her door as a fan to congratulate her for such a bold move to find love.

“He just asked for a photo souvenir as a fan,” she said, adding she had no idea how the photo had leaked on the Internet.

“I still can’t find the right man. And I want people to stop sharing such pictures and messages as it could affect that man’s family,” Sompong said.

She admitted that she was quite choosy when it came to love because she wanted the right man, a good-looking pensioner of appropriate age with a monthly income of more than Bt20,000, who was not overweight or underweight.

She said a man had contacted her by phone and passed her initial expectation so she was prepared to meet him. But when she learned that he weighed only 49 kilograms, she decided call it off because he was too thin.

Sompong said she was formerly married to an Air Force officer, who fathered her two children. After divorcing him, she married a German and stayed with him in Germany for 13 years.

She has since returned to Thailand and lives alone, so she is seeking someone to stay with during the final days of her life.