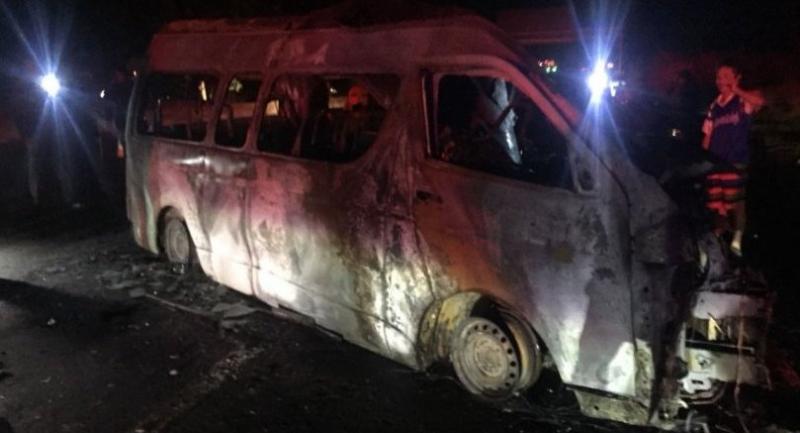 A chartered van taking Myanmar workers from Tak to Bangkok crashed into the rear of a truck in Sing Buri early on Friday, causing a fire that killed the driver and all 13 passengers, police said.

Pol Captain Jiradej Duangrassamee, deputy inspector of Mueang Sing Buri police station, said he was alerted to the accident at 3am.

He called for a fire engine when he found the fire still raging when he arrived at the scene on the Bangkok-bound Asia highway in Moo 3 village in Tambon Bang Mun.

It took about 20 minutes for the fire engine from Mueang Sing Buri Municipality to put out the blaze. Fourteen charred bodies were found inside the van.

The 10-wheel truck that the van hit was parked on the roadside. The driver, Sunthorn Fakthong, 56, told police that he was driving in the left lane when the van violently hit his rear end and burst into flames.

The driver of a van from the same company told police that the vans were chartered to take documented migrants from Tak’s Mae Sot district to Nonthaburi’s Bang Bua Thong district.

The driver said he saw the first van suddenly hit the rear of the truck.

Police suspected that the van driver fell sleep behind the wheel, leading to the accident.