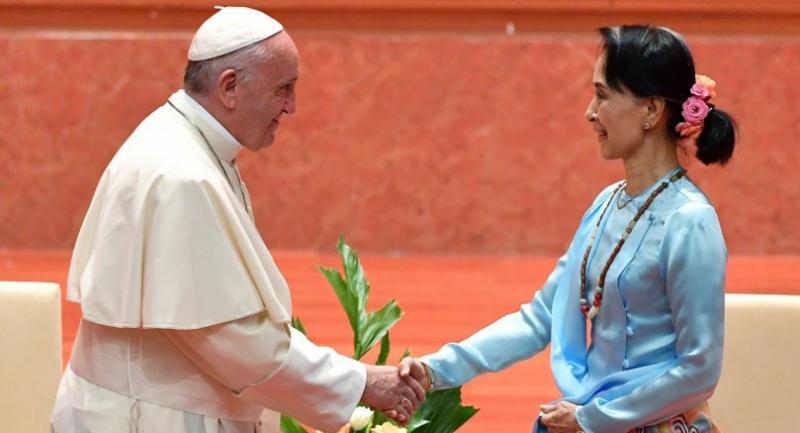 Pope Francis will hold talks with Myanmar's leader Aung San Suu Kyi on Tuesday, a key moment of a tour aimed at alleviating religious and ethnic hatreds that have driven huge numbers of Muslim Rohingya from the country.

Suu Kyi, a Nobel Peace Prize winner, has been ostracised by a global rights community that once adored her but is now outraged at her tepid reaction to the plight of the Rohingya.

After the talks in the capital Naypyidaw, the pontiff will address Suu Kyi and diplomats there -- his first opportunity to speak publicly about the conflict that looms over his trip. The 80-year-old pontiff late Monday received a "courtesy visit" from the powerful army chief Min Aung Hlaing -- whose troops, according to the UN and US, have waged a campaign of ethnic cleansing against the Rohingya from Rakhine state.

General Min Aung Hlaing has firmly denied allegations of widespread brutality by his forces, despite the flight to Bangladesh since late August of 620,000 Rohingya who have recounted widespread cases of rape, murder and arson.

His office said he told the pope there was "no discrimination" in Myanmar, and praised his military for maintaining "the peace and stability of the country".

The pope has repeatedly spoken out from afar about the crisis, standing up for what he has called his Rohingya "brothers and sisters". A similar approach in Myanmar is fraught with danger -- using the term "Rohingya" is unacceptable in a mainly Buddhist country where the Muslim minority are denied citizenship and branded illegal "Bengali" immigrants.

The country is listening closely to see if Francis will use the word "Rohingya" on Myanmar soil, and risk provoking the outrage of Buddhist nationalists.

The conversation centred around themes of unity in diversity, with the pope sharing a prayer and giving a "very, very beautiful speech", according to Sammy Samuels, a representative from the small Jewish community.

The Lady, as she is fondly known in Myanmar, finally came to power after elections in 2015 but has fallen from grace internationally for not doing more to stand up to the army in defence of the Rohingya -- whose name she will not publicly utter.

Rights groups have clamoured for Suu Kyi to be stripped of her peace prize. Oxford, the English city she once called home, on Monday removed her Freedom of the City award for her "inaction" in the face of oppression of the Rohingya.

So far, the pontiff has received a warm welcome to the majority Buddhist nation.

Myanmar's Catholic community numbers just over one percent of the country's 51 million people.

But some 200,000 Catholics are pouring into the commercial capital Yangon from all corners of the country ahead of a huge, open-air mass on Wednesday.

Zaw Sai, 52, from Kachin state, found space for himself and his family to camp out in a churchyard.

"We feel very pleased because we are from different ethnicities but are one in our religion," he told AFP.

Just days before the papal visit, Myanmar and Bangladesh signed a deal to start repatriating Rohingya refugees within two months.

But details of the agreement -- including the use of temporary shelters for returnees, many of whose homes have been burned to the ground -- raise questions for Rohingya fearful of returning without guarantees of basic rights.