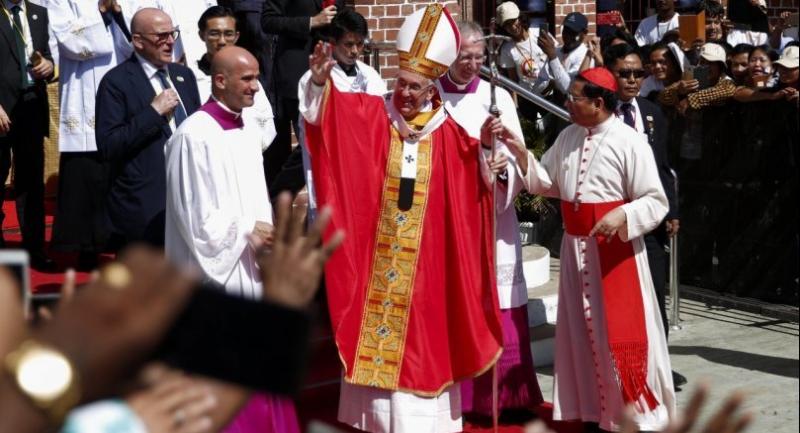 Pope Francis (C) waves to the crowd as he leaves Saint Mary's Cathedral, Myanmar's largest cathedral, after the Holy mass with young catholics in Yangon, Myanmar on November 30.//EPA-EFE

Yangon - Pope Francis on Thursday wraps up a visit to Myanmar defined by his decision not to address the Rohingya crisis in public, and flies to Bangladesh, where huge numbers of refugees from the Muslim minority languish in refugee camps.

Christians make up less than 0.5 percent of mainly Muslim Bangladesh, but have in recent years come under attack from Islamist radicals.

Just days before Francis' arrival, a Catholic priest disappeared in a village in northern Bangladesh.

In Myanmar the pontiff walked a diplomatic tightrope, staying silent on allegations that the army is waging an ethnic cleansing campaign against Rohingya Muslims.

He also refrained from mentioning the minority by name during his four-day trip.

Myanmar's government denies the Rohingya are an ethnic group, insisting they are "Bengali" immigrants who are not entitled to full citizenship.

But the Vatican rejected suggestions the decision not to confront the issue publically represented a failure of moral leadership.

Francis had previously expressed concern over the Rohingya's persecution.

But he was urged not to mention their name in Myanmar to avoid provoking hardline Buddhists, who were quick to claim the Pope's avoidance of the term 'Rohingya' as a victory.

The pontiff has been warmly embraced by Myanmar's minority of Catholics -- who make up just over one percent of the population.

On Thursday, Francis led a mass at a cathedral in downtown Yangon, which was also broadcast on a big screen in the church's basketball court where throngs of faithful craned for a view of their religious leader.

"This is a blessing for us to see the Pope. We are a very small community but he came for us," Tony Ravi, among those in the crowd, told AFP.

In his homily the pope urged young people to defend "human rights" and "justice" -- the central theme of his public addresses throughout his landmark visit.

All eyes will now be fixed on the pontiff as he heads to Bangladesh, a country struggling to provide for the more than 620,000 Rohingya who have crushed into its refugee camps after fleeing persecution in Myanmar.

He will arrive in Dhaka on Thursday afternoon.

The Catholic priest who disappeared on Monday in the same village as suspected Islamist extremists hacked a Catholic grocer to death last year.

Walter William Rosario, 40, had been organising for some 300 Catholics to travel to Dhaka for the pope's mass.

Since 2015 at least three Christians, including two converts from Islam, have been hacked to death in attacks blamed on the militant Jamayetul Mujahideen Bangladesh (JMB).//AFP