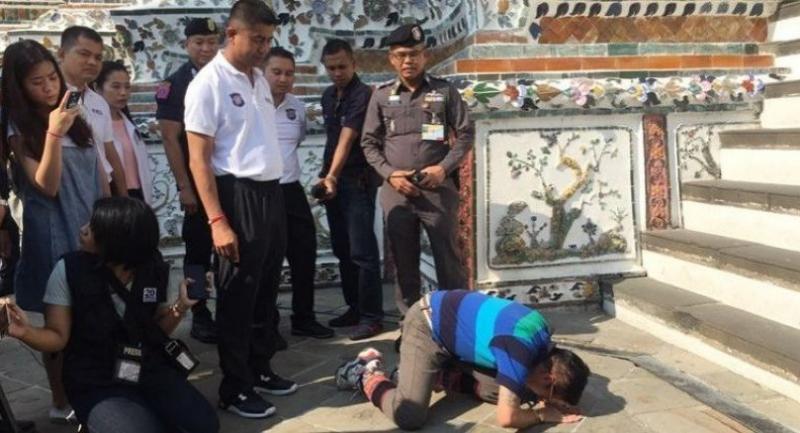 Tourist police have arrested a Thai tour guide who posted photos of herself with a Chinese tourist stepping on the much-respected stupa at the Temple of Dawn in Bangkok. She came under much criticism online after a picture of her taking a photo with a Chinese tourist with her foot stepping on the side of the stupa was widely shared on Facebook.

At the press conference, the guide paid respects to the stupa to show her remorse. She said she was sorry for what she did and would plead guilty when her case was filed in court.

Surachet said the woman was charged with showing disrespect to a national historical site, which carries a maximum jail term of one month and a maximum fine of Bt10,000.

She was sent to be arraigned in the Taling Chan provincial court after the press conference.

Surachet said the guide had acted improperly and could set a bad example.

“The arrest was not aimed at warning tourists with bad behaviour, but we would like to create a standard for tourists and guides to respect historical sites,” Surachet said.

He said police had taken action against tourists and guides in several similar cases but these did not make the news.

“From now on, police will enforce the law strictly if they find guides and tourists act improperly or are dressed improperly in important places,” Surachet warned.

He said tourist police had earlier held meetings with government agencies in charge of tourism and the tourist guide association about measures to create a good standard of practice for tourists at important places and national historical sites, such as the historical sites in Ayutthaya and Sukhothai.