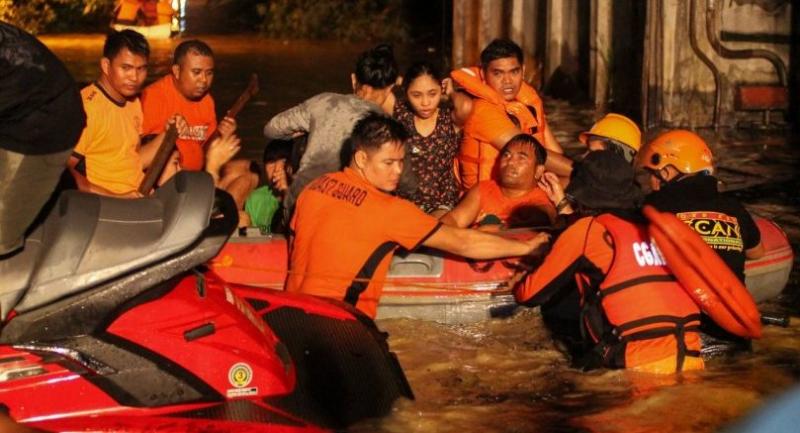 The death toll from a tropical storm in the southern Philippines has risen to 74, officials said Saturday, with concerns the figure could rise as dozens remained missing.

Tropical Storm Tembin struck Mindanao, the archipelago nation's second-largest island on Friday, triggering flash floods and mudslides that have since erased a remote village from the map.

The Philippines is pummelled by 20 major storms each year on average, many of them deadly. But Mindanao, home to 20 million people, is rarely hit by these cyclones.

Floodwaters started ebbing over the island on Saturday, authorities said, adding that more than 12,000 of its 20 million residents have now fled their homes.

Police reported 19 deaths in the mountain village of Dalama near Tubod town, and 26 others in surrounding towns and cities of Lanao del Norte province, one of the hardest-hit areas.

"The river rose and most of the homes were swept away. The village is no longer there," Tubod police officer Gerry Parami told AFP by telephone.

Police, soldiers and volunteers used shovels to dig through mud and debris in a bid to recover bodies in the farming village of about 2,000 people, Parami added.

"We've sent rescuers but they're making little progress due to the rocks," he said, adding the storm had killed eight other people elsewhere in Lanao del Sur.

Reports of more deaths were slowly trickling in from other parts of the island, which is experiencing power and communication outages due to the storm.

An area of particular concern was the impoverished Zamboanga peninsula, with Mindanao local television saying at least three towns there were hit by floods.

Five people were confirmed killed and 25 missing after flood waters submerged part of Sibuco town, while three others were killed in landslides in a nearby province, officials said.

"It is possible that they disregarded the warning of the local government" about the flooding risks, Sibuco mayor Norbideiri Edding told Manila radio station DZMM.

"We're hoping that they are still alive," he said of the missing.

Three people were meanwhile killed by landslides in the mountainous province of Bukidnon, police said.

Tembin struck less than a week after the devastating Tropical Storm Kai-Tak left 54 dead and 24 missing in the central Philippines.

The deadliest typhoon to hit the country was Haiyan, which killed thousands and destroyed entire towns in heavily populated areas of the central Philippines in November 2013.

Tembin was forecast to smash into the tip of the western island of Palawan late Saturday, the state weather service said.