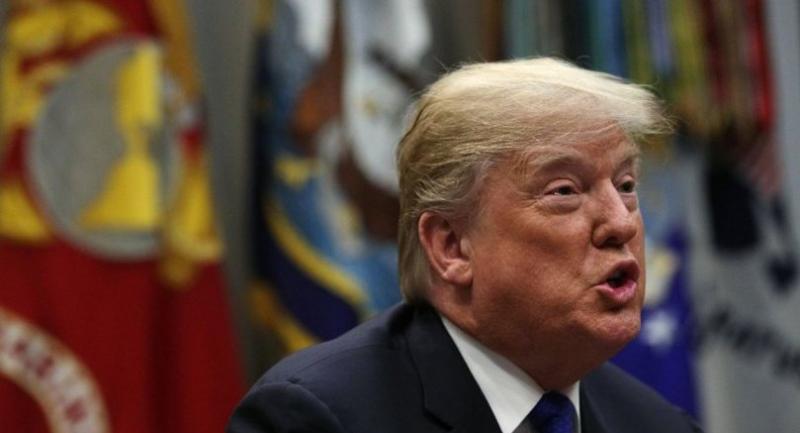 Washington - US President Donald Trump faced a new public relations crisis Friday with the publication of a tell-all book that depicts him as mentally unstable and in over his head, after his lawyers failed to block its release.

Publishers responded to a cease-and-desist letter from Trump by moving forward by four days the release of "Fire and Fury: Inside the Trump White House" -- an expose by author and political muckraker Michael Wolff that quotes key Trump aides expressing serious doubt about his fitness for office.

"I authorized Zero access to White House (actually turned him down many times) for author of phony book! I never spoke to him for book. Full of lies, misrepresentations and sources that don't exist," Trump tweeted Thursday.

"Look at this guy's past and watch what happens to him and Sloppy Steve!" Trump wrote -- a possible reference to Steve Bannon, his former chief strategist, or Steve Rubin, the publisher of Wolff's book.

The book -- which paints Trump as mentally unstable and far out of his depth -- includes extensive quotes from Bannon, who also received a "cease and desist" order from Trump's attorneys.

"Your publication of the false/baseless statements about Mr. Trump gives rise to, among other claims, defamation by libel, defamation by libel per se, false light invasion of privacy, tortious interference with contractual relations, and inducement of breach of contract," Trump's lawyers said in the letter to Wolff.

In the book, excerpts of which were published this week, Bannon is quoted accusing Trump's eldest son Don Jr of "treasonous" contacts with a Kremlin-connected lawyer, and saying the president's daughter Ivanka, who imagines running for president one day, is "dumb as a brick."

But it is Trump himself who is cast in the most unfavorable light by a series of his top aides.

The book claims that for "Steve Mnuchin and Reince Priebus, the president was an 'idiot.' For Gary Cohn, he was 'dumb as shit.' For H.R. McMaster, he was a 'dope.' The list went on."

White House issued a scorched-earth dismissal of the book, its author and his sources.

"I don't think (Americans) really care about some trash that an author that no one had ever heard of until today, or a fired employee, wants to peddle," said White House press secretary Sarah Sanders, calling the book "complete fantasy."

Behind the scenes, though, Trump has been enraged by the betrayal by Bannon -- a man who engineered the New York real estate mogul's link to the nationalist far right and helped create a pro-Trump media ecosystem.

He wasn't fired, but Bannon's main financial backer is formally cutting ties with him, The Washington Post reported.

"I support President Trump and the platform upon which he was elected," the newspaper quoted billionaire conservative donor Rebekah Mercer as saying.

Her family has had no contact with Bannon for months, nor has it given money to support his political agenda, "nor do we support his recent actions and statements," she was quoted as saying.

Bannon, who left the White House in August, is also quoted in the book as saying that the investigation by special counsel Robert Mueller into Russian interference in the 2016 election will focus on money laundering.

The investigation by Mueller, a former FBI director, is looking into whether the Trump campaign colluded with Russia to help get him elected -- a charge the president has repeatedly and vehemently denied.

Russia-related allegations in the book also ensnare Don Junior, who took a meeting with Russian lawyer Natalia Veselnitskaya in June 2016 after an intermediary promised material that would incriminate Trump's Democratic rival Hillary Clinton.

"The three senior guys in the campaign thought it was a good idea to meet with a foreign government inside Trump Tower in the conference room on the 25th floor -- with no lawyers," Bannon was quoted as saying in the book.

"Even if you thought that this was not treasonous, or unpatriotic, or bad shit, and I happen to think it's all of that, you should have called the FBI immediately," he said.

Wolff's book -- which he says is based on interviews with Trump, his senior aides and others -- makes a litany of shocking claims, including Trump's belief that he installed Mohammed bin Salman as Saudi Arabia's crown prince.

"We've put our man on top," Trump is said to have claimed to friends.

The book also claims that Trump considered appointing a friend to the Supreme Court vacancy filled by Neil Gorsuch, eats food from McDonald's because he believes it to be safe from poison, and that his team did not believe he was capable of winning the election.

"Shortly after 8 p.m. on Election Night, when the unexpected trend -- Trump might actually win -- seemed confirmed, Don Jr. told a friend that his father, or DJT, as he calls him, looked as if he had seen a ghost. Melania was in tears -- and not of joy," it said.//AFP