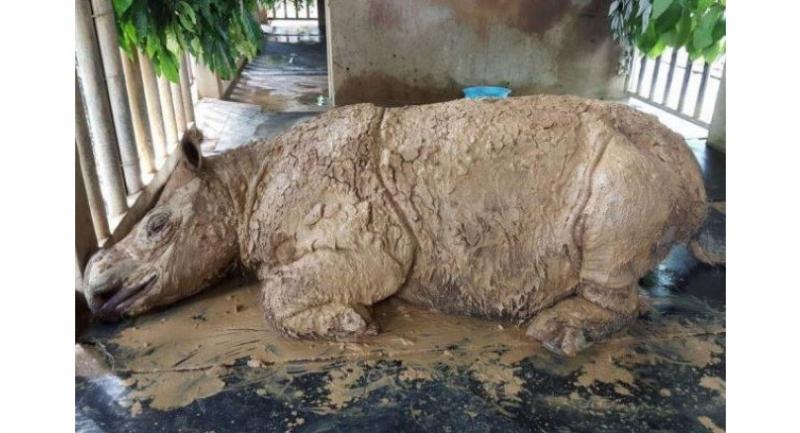 The last surviving female Sumatran rhino Iman sleeps most of the day as she struggles to recover from uterine bleeding since Dec 14 at the Tabin Wildlife Reserve in Lahad Datu.

KOTA KINABALU: Veterinarians are keeping a close watch on Iman, Ma­laysia's last female Sumatran rhino, as she continues to experience bleeding in her uterus.

Sabah Wildlife Department director Augustine Tuuga said they were in consultation with veterinarians from the United States, Africa and Germany on the available treatment methods to stop the bleeding.

“The best option is to do an endoscopic cauterising of the bleeder(s) but at the moment, this procedure is too risky due to her weak condition.

“We will use non-invasive means to reduce the bleeding from the cervix and vagina.

Iman has been sick after a uterine tumour burst triggered heavy bleeding since Dec 14 last year.

Tuuga said Iman's appetite varies each day but it has slightly improved as the keeper personally feeds her.

“Iman is sometimes lethargic as she loses significant amount of blood each day. She sleeps mostly half of the day and eats the foliage hung out for her several times a day.

“The amount of mixed browse (five species of foliage) is maintained at around 15kg each day with fruits totalling four to five kilograms,” he said, adding that bananas and mangoes were used to help in administering her oral medication.

He said her caregivers were able to obtain Iman’s favourite wild mangoes or “pauh” from the Tabin Wildlife Reserve where she is being cared for by the Borneo Rhino Alliance.

Tuuga said that they continue to place mud packs on Iman as they cannot allow her to wallow in her mud paddock as they have to treat her within the shelter.

Iman was rescued in 2014 and is the last Sumatran rhino found in the jungles of Malaysia.

In June last year, another female rhino – Puntung – was put to sleep due to cancer.

Tam, the lone male rhino in captivity in Sabah, is the only other known rhino in Sabah.

Conservationists have seen no signs of the presence of the animal in the wild and have considered them extinct.

There are only about 100 Sumatrans rhinos left in the world with most of them in Sumatra and Kalimantan in Indonesia.