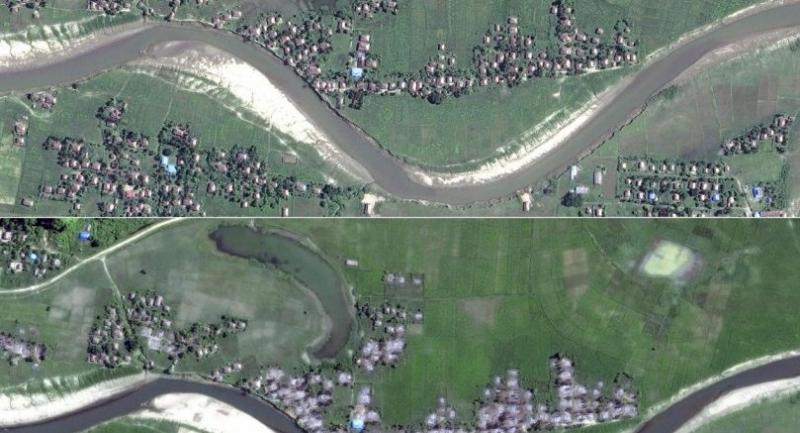 This combination of handout photos created on December 18, 2017 courtesy of Human Rights Watch/DigitalGlobe shows an analysis of satellite imagery revealing new destruction of Rohingya villages during October and November 2017./AFP

Myanmar police opened fire on a crowd of ethnic Rakhine Buddhists as they tried to seize a government office late Tuesday, in unrest that left seven dead and injured around a dozen more, police told AFP.

Several thousand Buddhist protesters had gathered for a ceremony in Mrauk U, an ancient temple complex that has so far remained unscathed by the military's crackdown on the region's minority Rohingya Muslim community.

It was not immediately clear why the rally descended into violence.

But the clashes came on the same day as a repatriation agreement was signed between Myanmar and Bangladesh to start the return of some 655,000 Rohingya refugees from squalid camps back over the border.

A police spokesman blamed the crowd for "starting the violence" after barging into a district administrative office and hoisting the Rakhine State flag.

"Security forces asked them to disperse and fired warning shots with rubber bullets... but they didn't stop, so police had to use real bullets," Myanmar police spokesman Colonel Myo Soe told AFP.

"Seven people were killed and 13 injured during last night's violence in Mrauk U," he said adding more than 20 police were wounded by sling shots and stones hurled by the crowd.

Mrauk U lies only a few dozen kilometres from the epicentre of violence that saw Rohingya driven in their hundreds of thousands into Bangladesh last August.

Rakhine state is bisected by divisions and communal hatreds.

Poor and marginalised, the ethnic Rakhine have a long-standing emnity with the Bamar-majority Burmese state.