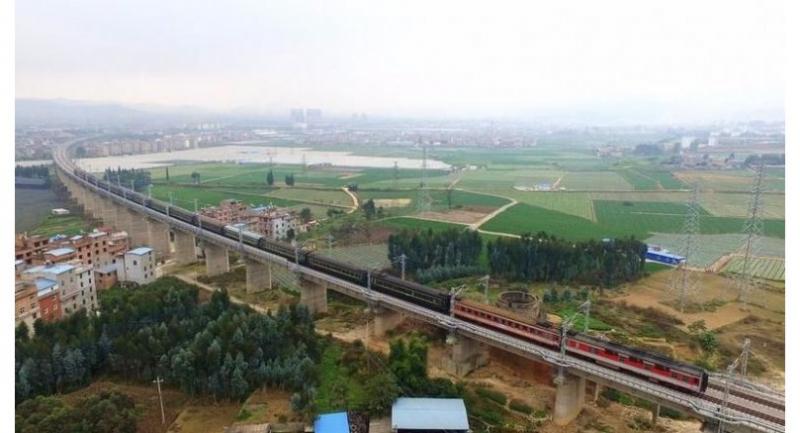 This Dec 15, 2017 photo shows the Kunming to Yuxi section of the China-Laos railway in China's Yunnan province.  Laos-China Belt and Road Cooperation Forum kicks off in Vientiane on Feb 2, 2018.(ZHANG XIANGTAO / XINHUA)

Laos-China Belt and Road Cooperation Forum kicked off in Vientiane on Friday, with a focus on development and cooperation between the two neighboring countries.

Laotian Prime Minister Thongloun Sisoulith said the two-day forum is the implementation of the outcomes of Chinese President Xi Jinping's state visit to the country in November 2017.

Sisoulith added the forum is also an enrichment and implementation of relevant policies and outcomes of the Belt and Road Forum for International Cooperation, which was held in Beijing last May.

During Xi's meeting with Bounnhang Vorachit, general secretary of the Lao People's Revolutionary Party Central Committee and president of Laos, the two sides agreed to jointly build a China-Laos economic corridor, fostering new seeds and mapping out a new blueprint as the Belt and Road cooperation has already achieved great success, Cai noted.

He said the forum was organized to push the implementation of the results reached by the leaders of the two countries and make positive contributions to accelerate the synergy of China's Belt and Road Initiative and Laos' strategy of turning itself from a "land-locked" country to a "land-linked" one.

Cai noted that media organizations can play a role in providing a communication platform for the two countries to strengthen development and ties.

He called on expanding ties between media organizations and jointly setting up a Belt and Road economic news and information alliance. He said Xinhua stands ready to deepen cooperation with Lao News Agency and other media organizations in the country.

Kikeo Khaikhamphithoune, member of the Secretariat of the Central Committee of Lao People's Revolutionary Party and head of the Party's Commission for Propaganda and Training, said jointly building the Belt and Road will promote all-round communication and cooperation between the two countries and benefit the two countries and people.

The forum, themed "Opportunities and Outlook of Laos-China Cooperation - Strategic Integration of Laos' Strategy of Transformation from a Landlocked to a Land-linked Country and the Belt and Road Initiative," is jointly organized by the Commission for Propaganda and Training of the Lao People's Revolutionary Party, the Lao Ministry of Information, Culture and Tourism, China's Xinhua News Agency, the Industrial and Commercial Bank of China and the Lao Chinese Chamber of Commerce.

Over 500 delegates from government departments, enterprises and other sectors are invited, which will also witness the issuing of "Report on China-Laos Cooperation Opportunities under the Belt and Road Initiative in 2018" by the China Economic Information Service.