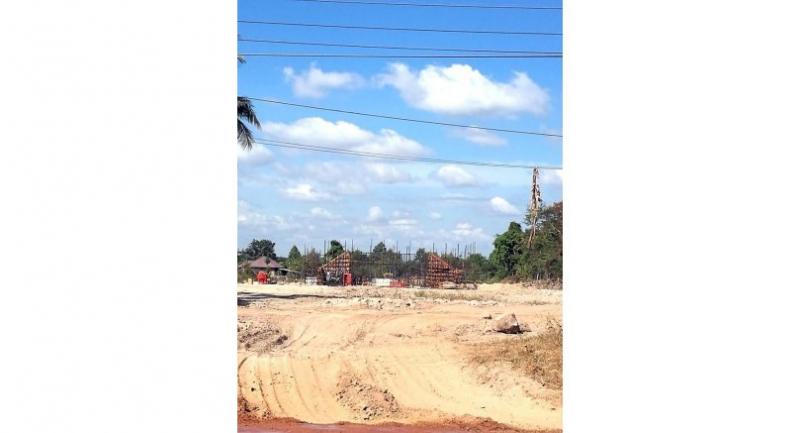 The railway under construction in Xaythany district, Vientiane.

Construction of the 409-km Laos-China railway was 20.3 per cent complete as of December 2017 after a whole year of operations, Lao authorities in charge said last week.

A senior member of the Laos-China Railway Construction Project Management Committee, Mr Pothong Ngonphachanh, told the forum on Laos-China Cooperation under the One Belt, One Road initiative held in Vientiane last week that it will take five years to complete the project.

The completion date was brought forward in line with a request made by Prime Minister Thongloun Sisoulith during a working trip to the north when he visited project construction sites.

The change in the deadline means the project would be completed in time for the 46th anniversary of the founding of the Lao People’s Democratic Republic (December 2, 1975 – December 2, 2021).

Some 53 tunnels are being bored to allow the railway to pass through mountainous areas. So far the combined length of the tunnels bored is 37,314 metres, which represents 18.8 percent of the total length of 197.83 km of all the 75 tunnels that will be bored along the length of the railway.

Meanwhile, 47 bridges out of the total 167 bridges are under construction, according to Mr Pothong.

The combined length of all the tunnels and bridges is as much as 62 percent of the total length of the railway linking Vientiane to the Laos-China border.

Other components of the project, including power lines, water supply, and roads, are being built.

As much as 84 percent of the land area needed for the railway has been handed over to the Chinese contractors so they can proceed with construction.

But Mr Pothong admitted that compensation had not yet been paid to people who had lost land and other property to the project.

He added that addressing the impact of property loss and the payment of compensation involved many steps, saying it was a complicated and time-consuming issue.

A resident of Dongxiengdy village in Naxaithong district, Vientiane, Mr Vongdao Xayavong, told Vientiane Times that his house lay in the path of the railway and he would have to move. But he is unable to do so because he has not yet received any compensation.

More than 30 families in the village will be affected by the project.

It has been reported that 4,411 families in the provinces of Luang Namtha, Oudomxay, Luang Prabang and Vientiane and in the capital city will be affected by the railway.

Lao authorities in charge are aware that they are up against a raft of challenges resulting from the Laos-China railway.

One of the challenges is the participation of Lao companies in construction, how many jobs would be offered to Lao workers, and to what extend local companies and people can benefit by providing locally-made goods such as food, construction materials and equipment.