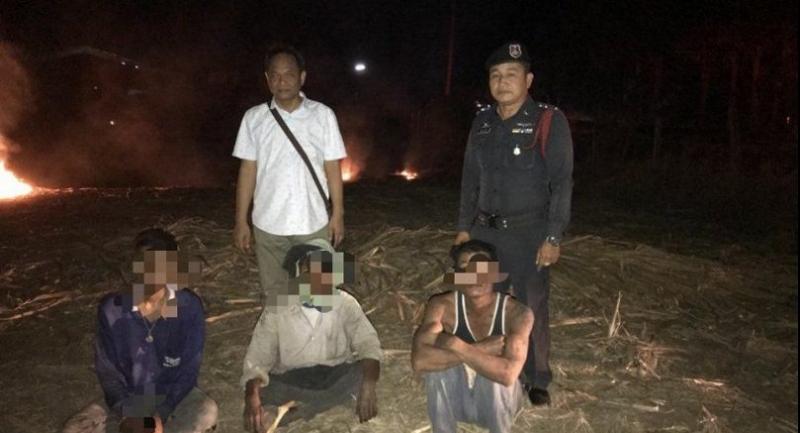 Police arrested three men, including two Myanmar workers, in the Tak province for violating the ban on agricultural fires early on Sunday.

Panuphoom Nakkrajang, 24, Zaw La, 46, and Tuangmi, 39, were found burning down a forest zone along the Phop Phra-Ban Don Chedi Road in the wee hours of Sunday.

Rattanakul Sangkhasila, a senior official from the Phob Phra District Office, lodged a complaint with local police after receiving a report of a fire in the forest zone. Police and administrative officials then rushed to the spot and arrested the three men.

Police found a lighter in Panuphoom’s pocket. He and the two Myanmar workers have been charged with burning a forest zone, lighting a fire in an open area, and violating Tak authorities’ 60-day ban on agricultural fires that came into effect on February 10.

Mae Sot district chief Chaiyapreuk Chientanrak also ordered action against those involved in burning a 50 rai of sugarcane plantation in his area on Saturday.

Authorities in Tak have imposed a ban on fires in public places to stem the problem of haze, which is often aggravated when farmers clear land for farming with fires.