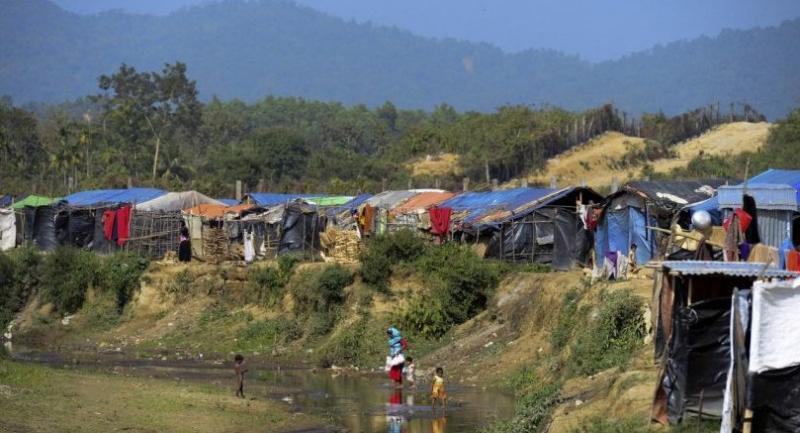 In this photograph taken on January 23, 2018, Rohingya Muslim refugees cross a canal next to a settlement near the 'no man's land' area between Myanmar and Bangladesh in Tombru in Bangladesh's Bandarban district./AFP

Myanmar has failed to put in place conditions for the safe return of 688,000 Rohingya refugees who fled an army crackdown six months ago, the UN refugee chief said Monday.

The refugees are sheltering in makeshift camps in Bangladesh despite an agreement reached between Myanmar and Bangladesh allowing for their return to their homes in Rakhine state.

"Let me be clear: conditions are not yet conducive to the voluntary repatriation of Rohingya refugees," UN High Commissioner for Refugees Filippo Grandi told a Security Council meeting, speaking by videoconference from Geneva.

"The causes of their flight have not been addressed, and we have yet to see substantive progress on addressing the exclusion and denial of rights that has deepened over the last decades, rooted in their lack of citizenship."

Myanmar regards the Rohingya as immigrants from Bangladesh and denies them citizenship, even though they have been there for generations.

US Ambassador Nikki Haley urged the council to ensure Myanmar's military is held accountable for its campaign against the Rohingya, following accounts of killings, burning of villages, rape and mass graves.

"This council must hold the military accountable for their actions and pressure Aung San Suu Kyi to acknowledge these horrific acts are taking place in her country. No more excuses," Haley said.

The United Nations has accused Myanmar of carrying out an ethnic cleansing campaign by forcing the Muslim Rohingyas into exile.

China, a supporter of Myanmar's former ruling junta, called for patience and noted that "stability and order" had been restored to Rakhine state.

Measures should be adopted by Myanmar "to address the root cause of poverty through development" in Rakhine, he said, sidestepping appeals for citizenship rights for the Rohingya.

'Too scared to return'

The meeting came nearly three months after the council adopted a statement demanding that Myanmar rein in its security forces and allow the Rohingya to voluntarily return.

The UN refugee chief said that while the exodus had significantly decreased, the flow "still continues," with some 1,500 refugees arriving in Bangladesh this month.

Haley said the refugees should not return to Myanmar until they feel confident that "they will not fall victim to the same horrors that drove them from their homes in the first place."

"Right now, these refugees don't have this confidence," she said. "Many are too scared to return to their country."

Haley's concerns were echoed by France, Britain and Sweden, among other countries, but Myanmar's ambassador said his government was ready to move ahead with plans to take back refugees.

Myanmar has made "great strides" in restoring stability and has given Bangladesh a list of "508 Hindus and 750 Muslims" to be among the first returnees, said Ambassador Hau Do Suan.

The UN refugee chief also raised alarm over the monsoon rainy season starting next month, warning that 100,000 refugees were living in flood-prone areas and must be urgently relocated.

International support to Bangladesh's government must be stepped up "to avert a catastrophe," he warned.

The council is demanding that aid workers be allowed to reach those displaced inside Rakhine state and wants UN Secretary-General Antonio Guterres to quickly appoint a special envoy to Myanmar.