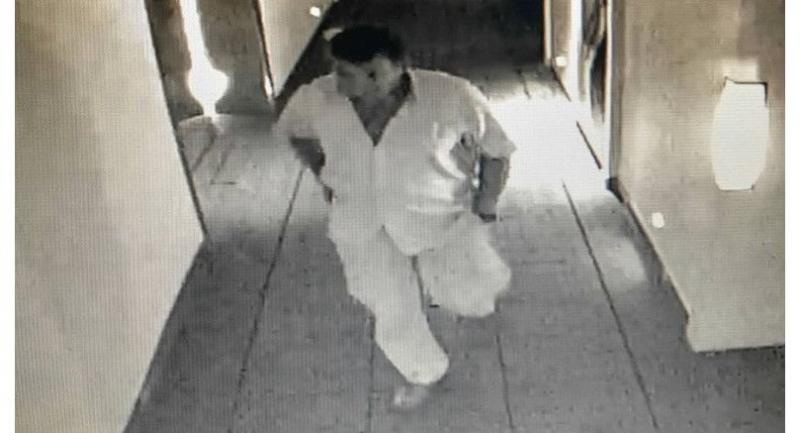 The suspect as seen on CCTV camera.

A 67-year-old British man was arrested in Bangkok early on Monday for allegedly robbing and drugging a fellow countryman in his hotel room.

John Lane, who has a Thai wife and has been living in Tambon Saensuk in Chon Buri's Muang district for 40 years, was arrested at 1.15am at the entrance to Soi Sukhumvit 4.

Lumpini police say a British tourist, Michael Travers, 69, filed a complaint with police on February 12 that he had been robbed and drugged in his room at a luxury hotel in the Ploenchit area of the city.

Travers told police that he was returning to his room on the 25th floor at 1am after drinking at the lobby bar on the ground floor and met Lane in the lift.

He said Lane walked after him and, after he had opened the door to his room, pushed him inside, tied his hands and covered his face with a mask.

He said Lane forced him to reveal the pin number of his ATM card, which Lane also took, and then made him drink something that caused him to fall asleep.

He woke up at 3.50am and went downstairs to report the episode to staff at the front counter.

Police saw Lane’s image on the CCTV footage and obtained an arrest warrant against him.

They say Lane has denied the charges but he was identified by the victim.

Police believe Lane might also be responsible for robbing several other elderly tourists at luxury hotels in the Lumpini and Thonglor areas.