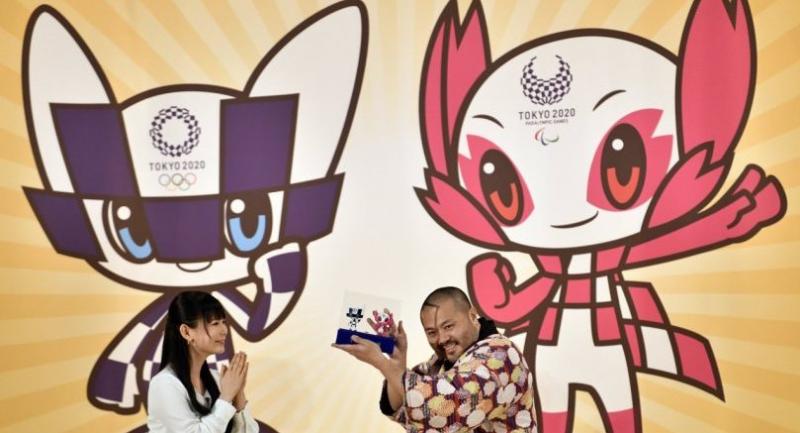 Tokyo Wednesday unveiled its long-awaited mascot for the 2020 Olympic Games: a futuristic blue-checked, doe-eyed character with pointy ears and "special powers" that was picked by schoolchildren across mascot-mad Japan.

The mascot, which has yet to be named, was selected by elementary school kids across the country from a shortlist of three competitors instantly recognisable as "made in Japan".

The kids picked option "A", which, according to the Tokyo 2020 organisers, has a "strong sense of justice and is very athletic".

Helpfully, it has a magical power that enables it "to move anywhere instantaneously".

Its Paralympic counterpart sports pink checks derived from Japan's famous cherry blossom and is "usually calm, however, it gets very powerful when needed".

Its magic power: "It can talk with stones and the wind. It can also move things by just looking at them".

The pair received over 100,000 votes, more than the other two design sets combined.

Mascots are massive in Japan, the land of Hello Kitty and Pokemon, and there are literally thousands representing everything from small communities to prisons.

Known locally as "yuru-kyara" or "laid-back characters", mascots can also be major money-spinners.

Social media reaction was mixed with one user describing the winners as "very Japanese and very cute". But others said they wanted something "more round" and more "huggable."

"School children, really? Should be B or C", tweeted one user under the handle @shougodesu_.

Several users pointed out that the futuristic-looking mascot chosen appealed more to children whereas adults preferred the softer and more traditional options.

The Tokyo 2020 mascot will hope to replicate the success of Soohorang, the cuddly stuffed tiger from the Winter Olympics in Pyeongchang handed out to athletes on the podium.

More than 100,000 stuffed dolls (Soohorang and Paralympic mascot Banbdabi) were sold over the past year, Pyeongchang organisers said.

Soohorang sparked an inadvertent social media frenzy after a volunteer dressed up as the tiger got stuck in a doorway, needing a helper to push him through.

The Paralympic mascot, a predominantly blue and green figure whose head was covered with leaves to represent Brazil's rich vegetation, was named Tom after musician Tom Jobim.

Brazil netted $300 million in profits from licensing intellectual property from the 2016 Games, according to the International Olympic Committee (IOC).

But Wenlock and Mandeville, the widely mocked mascots of the 2012 London Games, proved far from Olympic gold.

The one-eyed characters were dubbed "bizarre" and "creepy" by some, reportedly sending shares in their manufacturer down by more than a third.

The Rugby World Cup, which takes place in Japan next year, has already unveiled a pair of pot-bellied lions as its mascots.

With luxurious manes, short horns and faces that appear to be shaped like rugby balls, mascots "Ren" and "G" are inspired by "shishi," the mythical lion-like figure that features in Japan's new year celebrations and kabuki theatre.

Organisers turned to children to select the mascot, hoping to avoid a repeat of the bungled roll-out of the official Olympic logo, which ended up having to be scrapped following accusations of plagiarism.

It was deemed to be too similar to the logo of a Belgian theatre and a separate Spanish design.

"Thank you. My mind is going absolutely blank. I don't know what to say, " he said when the decision was announced at the ceremony.

"I want to tell this to my lovely wife."//AFP