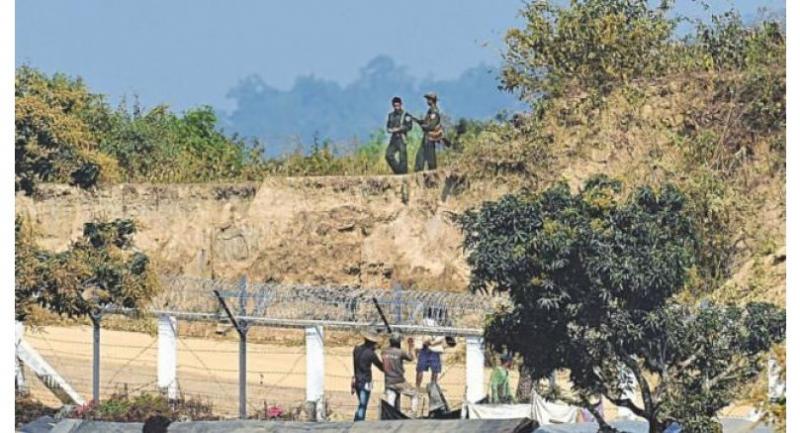 Myanmar army personnel keeping watch as Myanmar workers build a fence along the Bangladesh-Myanmar border, as seen from Tombru in Bandarban on Tuesday. /AFP

Myanmar Thursday deployed a huge contingent of its army with heavy weapons along the Tombru border with Bangladesh, creating panic among the Rohingyas on the adjacent no-man's land.

Frightened, some of the refugees entered the Bangladesh territory.

Terming the army deployment a violation of border norms, Border Guard Bangladesh also increased its strength along the border at Bandarban's Naikhyangchhari to "face any circumstances".

Myanmar made the move 10 days after it had agreed to take back the Rohingyas from the no-man's land.

Some 6,500 Rohingyas had been living on the no-man's land near the Bangladeshi village of Konapara since they fled their homes fearing persecution in Rakhine.

Roughly half of the people staying in makeshift camps on the border line moved to camps inside Bangladesh after the two countries met to discuss possible repatriation on February 20, Reuters reported yesterday.

Nearly 700,000 Rohingyas fled Myanmar and entered Bangladesh after insurgent attacks on August 25 last year sparked a military crackdown that the United Nations has said amounted to ethnic cleansing, with reports of arson attacks, murder and rape.

Meanwhile, Maj Iqbal Ahmed, second-in-command of BGB-34 Battalion in Cox's Bazar, said a member of Myanmar security forces fired a shot in the air around 7:50pm following an altercation with some Rohingyas on the no-man's land.

The altercation sparked after some Myanmar troops hurled abuse at the Rohingyas. Those troops retreated soon after opening the blank fire, he said.

Shamsul Alam, who entered Bangladesh from the no-man's-land along with his four family members yesterday, said at least 400 to 500 army men had gone near the border fence earlier in the morning.

"Some of them [army men] even tried to cross the fence with ladders but they couldn't do that because of BGB's presence on the Bangladesh side,” he told The Daily Star yesterday evening over phone.

Later, the troops used loudspeakers and asked those on the no-man's land to vacate the area as soon as possible.

"Frightened, we left the area and took shelter at the Kutupalong camp,” he said, adding that many other families also left the no-man's land.

The troops asked the Rohingyas to go to Bangladesh, creating panic among them, he said, adding that the army had made similar announcement through loudspeakers last month.

That created panic among the Rohingyas there, he added.

At a press conference in Dhaka yesterday, the Border Guard Bangladesh (BGB) expressed concern over the heavy deployment of the army along the border.

It said the Myanmar has violated border norms.

"A number of Rohingyas took shelter on the zero line near Konabari area of Naikhyangchhari upazila. Centring the issue, Myanmar deployed additional forces of army and BGP equipped with arms, which is out of the border norms," said Brig Gen Mojibur Rahman, additional director general (operation and training) of the paramilitary force.

He said BGB called on the Myanmar authorities for holding a border-level flag meeting.

"We also protested Myanmar increasing its force in the bordering area," he said expressing hope to resolve the “volatile situation” through the flag meeting immediately.

Due to the presence of the Rohingyas on the zero line, Rahman said Myanmar's Border Guard Police (BGP) and army had been carrying out various activities, including setting up barbed wire fences and modern surveillance equipment, in the bordering area.

Using loud speakers, the Myanmar authorities, for the last one month, had also been calling upon the Rohingyas to leave the zero line area, the BGB official said.

In continuation of those activities, Myanmar deployed a huge number of troops within 150 yards of the Myanmar territory between 34 and 35 border outposts of Tombru around 10:30am yesterday, Rahman said.

He said the BGB also increased its force there.

"We are informed about the situation through intelligence and ground surveillance. We are alert and monitoring the situation very closely. The BGB will act accordingly to face any circumstances for the sake of the country," he said.

Responding to a query, Rahman said Myanmar's motive was not clear but it seemed to be an attempt to push the Rohingyas to Bangladesh.

"The situation has not taken an alarming turn yet so that we have to deploy more additional forces from other agencies," he said claiming that the overall situation was under their control.

During the meeting, acting Foreign Secretary Khurshid Alam conveyed to the Myanmar envoy concerns of Bangladesh on the military build-up around the border pillar-34 near the Tombru border.

Khurshid also conveyed to the Myanmar ambassador that such military build-up would create confusions within Bangladesh and escalate tensions on the border, said a foreign ministry press release.

He told the ambassador to convey the message to the Myanmar authorities for immediate pull back of the Myanmar security forces along with military assets from the area.

The acting foreign secretary also expressed concerns that such an event may hamper the Rohingya repatriation process, which both sides agreed to implement.

A diplomatic note on the subject was handed over to the ambassador, added the release.

ROHINGYAS ON ZERO LINE NOT TO BE ALLOWED IN: HOME MINISTER

Rohingyas stuck in the no-man's land would not be allowed to enter Bangladesh, said Home Minister Asaduzzaman Khan Kamal.

He made the comment while addressing the concluding parade of 91 recruit batch of BGB at the ground of Baitul Izzat training centre in Satkania upazila of Chittagong yesterday.

He also said during a meeting, the Bangladesh authorities informed the Myanmar's home minister about the Rohingyas stuck on the no-man's land and requested him to make efforts to take them back as soon as possible.

“We informed them that they [Rohingyas] are the nationals of Myanmar. The Myanmar home minister had assured us that they would take them back following scrutiny,” he said.

“We will not allow the Rohingyas to enter Bangladesh. The BGB is keeping an eye on the border,” he added.

The minister also alleged that Myanmar broke several promises in the past.

Our Correspondents from Chittagong, Cox's Bazar and Bandarban also contributed to the report.