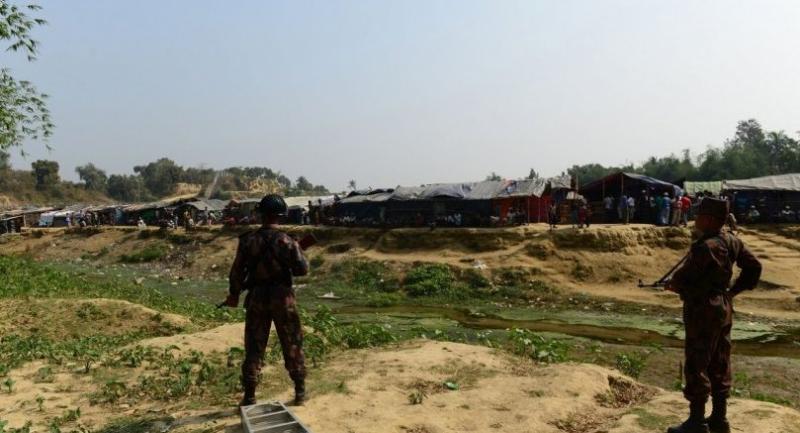 Border Guard Bangladesh personnel stand guard along the Myanmar-Bangladesh border in Tombru in the Bangladeshi district of Bandarban on March 1, 2018. /AFP

Myanmar on Friday defended deploying fresh troops to a border zone with Bangladesh where thousands of Rohingya refugees are camped, blaming a militant threat as Dhaka called for an immediate retreat to lower tensions along the troubled frontier.

The increased security presence this week has centred around a strip of "no man's land" between the two countries where some 6,000 Rohingya sought shelter after fleeing a brutal Myanmar army crackdown last August.

The military campaign drove some 700,000 Rohingya across the border in total, with most travelling on to sprawling refugee settlements in Bangladesh's southeastern border district of Cox's Bazar.

The UN has accused Myanmar of waging an ethnic cleansing campaign against the Muslim minority.

Yet Myanmar has staunchly defended the crackdown as an effort to snuff out Rohingya militants who raided police posts last year.

The recent spike in security along the border is a response to new intelligence about the movement of Rohingya militants, said Myanmar government spokesman Zaw Htay.

"We acted this way based on the information we got regarding terrorism, especially the ARSA movement," he told AFP, using an acronym for the Arakan Rohingya Salvation Army, a militant group, and declining to elaborate further.

"It was not aimed at antagonising Bangladesh," he added.

On Thursday Bangladesh's foreign ministry said it summoned Myanmar's envoy to call for an "immediate pullback of Myanmar security forces along with military assets from the area."

In recent weeks the Rohingya living in the no man's land strip have faced growing pressure from Myanmar soldiers, who have stepped up patrols along the barbed-wire border fence near the camp and ordered the group to leave over loudspeakers.

On Thursday some 100 Myanmar soldiers arrived near the refugee camp in heavy military vehicles, according to Bangladesh border guards and Rohingya.

The heightened tensions will do little to speed-up a stalled repatriation plan signed by the neighbours in January.

The process was delayed at the last moment due to lack of preparations and protests by the refugees, who fear returning to Myanmar without guarantees of basic safety and citizenship.

Myanmar has branded the Rohingya as illegal immigrants from Bangladesh and systematically dismantled their legal rights and access to basic services in Rakhine, a state where they have lived for generations.