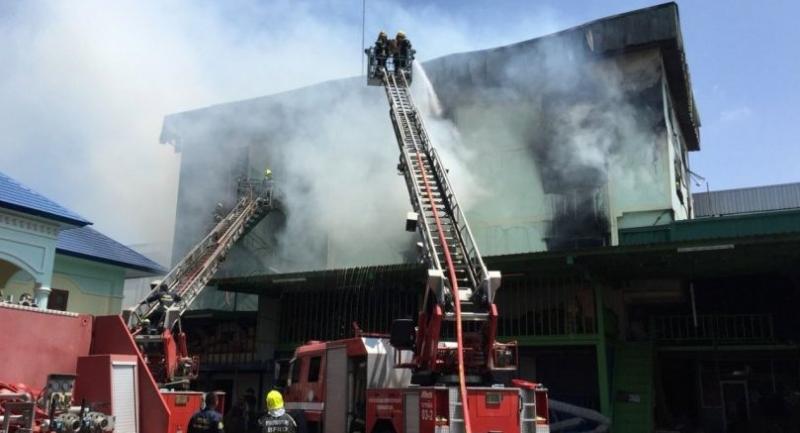 A fire swept through a warehouse in Bangkok’s Bang Bon district on Sunday morning, causing damage worth more than Bt200 million.

Inside the warehouse were musical instruments, sports equipment and sportswear. The building, which belongs to Landco Sport and Musical Co, is now closed pending inspection by public works officials.

“We are a wholesaler,” the company’s owner Achara Artiphanu said of the company, whose four-storey building covers more than one rai (0.16 hectare) of land.

Pol Lt-Colonel Sirichart Chanpromma, an inspector at the Tha Kham Police Station, said the fire spread quickly because the products inside were easily flammable.

“Now, the blaze is under control,” he said yesterday afternoon. “But firemen have to constantly inject water to prevent smouldering debris from re-igniting the fire.”

He said the fire did not cause any casualties as nobody was at the warehouse at the time the fire occurred.

“It remains unclear what caused the fire. We will have to interview the warehouse owner and wait for the results of tests by forensic officers,” Sirichart said.

Achara said she had been running the wholesale business for more than four decades, “but we moved to this place in 2004”.

She said the warehouse was equipped with safety facilities, including fire-extinguishing equipment.

“But today is the Sunday, and no one was working inside the warehouse,” she added.

Achara said someone heard an alarm before noticing smoke billowing out of the building.