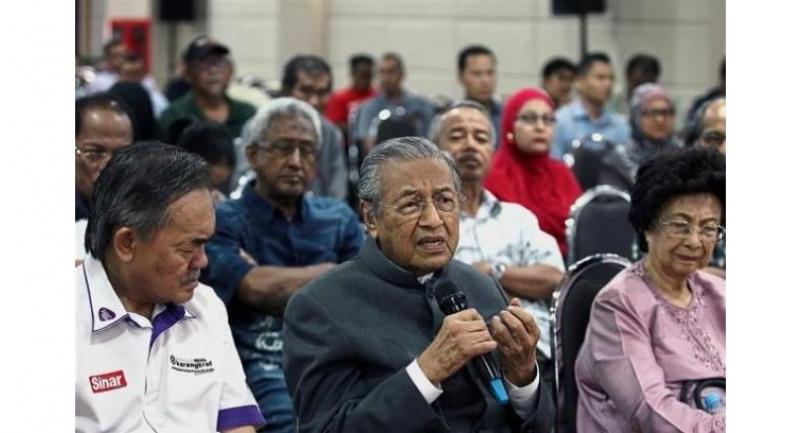 Petaling Jaya - Panellists at a forum discussing whether Pakatan Harapan chairman Tun Dr Mahathir Mohamad was too old to become Prime Minister had a huge surprise when the man himself turned up at the event.

To the shock of those present, Dr Mahathir dared them to call him old in person.

I’m here, guys. Say it to my face,” the Parti Pribumi Bersatu Malaysia chairman posted on Twitter along with a picture of himself sitting while facing the forum’s panellists and moderator.

Dr Mahathir reportedly arrived at the forum with his wife Tun Dr Siti Hasmah Ali about an hour after it started at 3.15pm yesterday.

Sinar Harian, which organised the forum, quoted the former prime minister of 22 years as saying he was still active physically and mentally.

“There are two types of age – one in terms of years and another in terms of the body. The age of the body does not necessarily equate to the age in years.

He was seated in the front row of the forum, together with other forum attendees.

To a question on how he looked after his health, Dr Mahathir, who is Pakatan Hara­pan’s prime minister candidate, said he did not overeat.

“My mother used to tell me to stop eating when food is tasty,” he said.

Dr Kamarul Zaman had said that no matter how healthy a person was, there would come a time when he would be weak.

“Leading a party is tough because of the age factor and a person’s strength,” he was quoted as saying by Sinar Harian.

In a blog post earlier, Dr Mahathir, who will turn 93 in July, said Prime Minister Datuk Seri Najib Tun Razak did not need to be afraid of debating him.

“YAB (Najib) is still young. What is there to be afraid of in debating a 92-year-old person?” he said.

He added that he realised he did not have much time left but as long as he still had life in his body, he would fight for his race, religion and country.