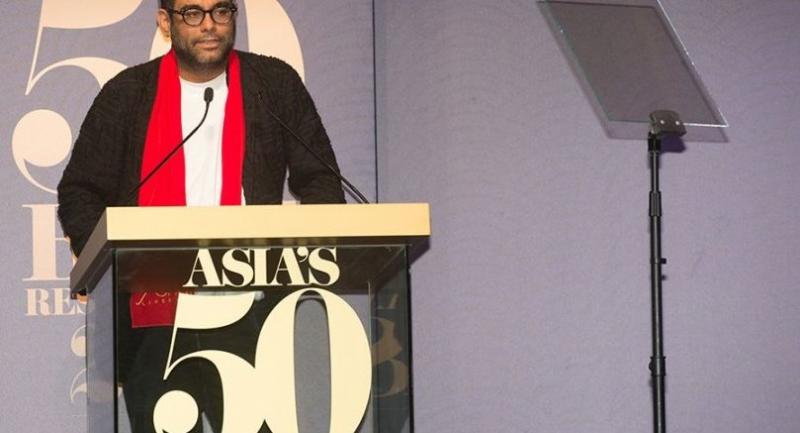 Gaggan Anand of Gaggan, the Best Restaurant in Asia Gaggan Anand of Gaggan, the Best Restaurant in Asia

For Japan, Den (No.2) rises nine places to earn the title of The Best Restaurant in Japan, replacing five-time title holder Narisawa (No 6). The top 10 also has Florilege (No 3) and Nihonryori RyuGin (No 9). Tokyo-based Il Ristorante – Luca Fantin – is a newcomer to the list, landing at No 28.

La Cime in Osaka makes its debut on the list at No 17, earning the Highest New Entry Award, sponsored by Aspire Lifestyles. With a menu dedicated to modern French cuisine, Chef Yusuke Takada sources local, seasonal ingredients to present dishes of impeccable style and refinement.

Japanese chefs and restaurants were recognised in several individual award categories. Acclaimed chef Yoshihiro Narisawa is this year’s recipient of the peer-voted Chefs’ Choice Award, sponsored by Estrella Damm. For two decades, Narisawa has earned the respect of his peers with his refined dishes and ability to blend French cooking techniques, employ sustainable practices and honour Japanese culinary traditions.

Rising four places to No 5, chef Julien Royer’s Odette claims the title of The Best Restaurant in Singapore. Singapore claims seven entries on the list, including Burnt Ends (No 12), Waku Ghin (No 23), Les Amis (No 29), Corner House (No 36) and Jaan (No 44) as well as first-time entry Whitegrass (No 50).

Amber (No 7) in Hong Kong is named The Best Restaurant in China for a third successive year. The nine Hong Kong restaurants on the list include such perennials as 8 1/2 Otto e Mezzo Bombana (No 13), Ta Vie (rising 17 places to No 16) and Lung King Heen (No 24). They’re joined by two newcomers, Neighborhood (No 32) and Belon (No 40).

Hong Kong’s The Chairman (No.22) and Mume in Taipei (No.18) tie for the Highest Climber Award with both restaurants rising 25 places.

Macao is represented by Jade Dragon (No 35) while Mainland China counts Shanghai restaurants Ultraviolet by Paul Pairet (No 8) and Fu He Hui (No 30).

Mingles (No.11) in Seoul retains the title of The Best Restaurant in Korea while Jungsik lands at No 26, TocToc, the 2017 recipient of the Miele One To Watch Award, enters the list at No.42.

“The Asia’s 50 Best Restaurants list welcomes eight new entries in 2018, reflecting the ongoing culinary innovation happening in this region. In its sixth year, we continue to recognise new talents, identify industry trends and celebrate excellence. We are thrilled to honour the 50 restaurants on the 2018 list, as well as the individual award winners, who inspire us with their singular visions and remarkable achievements,” said William Drew, group editor of Asia’s 50 Best Restaurants.

Nicolas Lambert of Caprice in Hong Kong also receives Asia’s Best Pastry Chef Award, sponsored by Valrhona. Hailing from a family of patissiers, Lambert honed his skills training alongside world-acclaimed French pastry chefs, including Christophe Michalak at Hotel Plaza Athenee in Paris. Since joining Caprice in Hong Kong in 2015, the French chef’s delicate creations and artful plating have earned him a devoted following. His signature La Framboise Reconstituee reveals his technical skills as well as his ability to push creative boundaries.

The Art of Hospitality Award goes to Ultraviolet by Paul Pairet in Shanghai. Consistently within the top 10 of Asia’s 50 Best, Ultraviolet is an immersive, multi-sensory dining experience that combines gastronomic mastery and theatrical wizardry. Transported to a mystery purpose-built venue, guests are served a tasting menu in which each course is accompanied by bespoke lighting, visual effects and other senses-stimulating cues.

Other award recipients include Toyo Eatery in Manila earning the Miele One To Watch Award for its modern interpretations of Filipino culinary traditions. Celebrated chef Andre Chiang, of Raw in Taipei and formerly of Restaurant Andre in Singapore, is this year’s deserving recipient of The Diners Club Lifetime Achievement Award.

Find out more at www.TheWorlds50Best.com/asia.