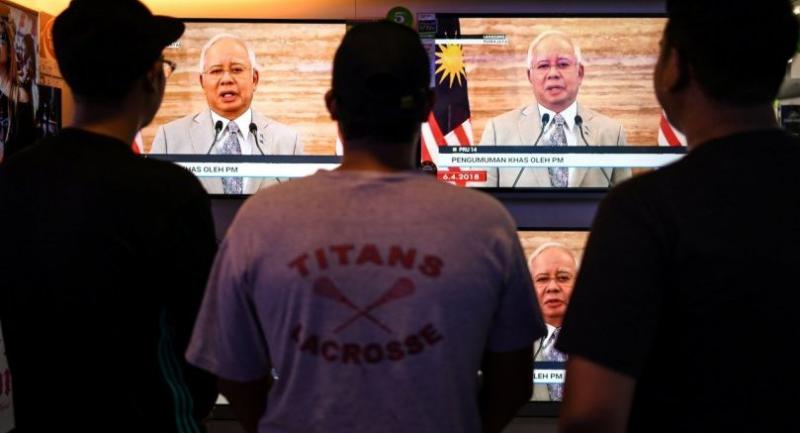 A man (C) watches televisions on display at a shopping mall store as Malaysian Prime Minister Najib Razak announces the dissolution of Parliament as he addresses the nation during a live telecast in Kuala Lumpur on April 6, 2018./AFP

Malaysian Prime Minister Najib Razak Friday announced the dissolution of parliament for a general election that will pose one of the sternest-ever tests for his ruling coalition, due to a massive financial scandal and a challenge from former leader Mahathir Mohamad.

After laying out the Barisan Nasional coalition's recent achievements in a 25-minute speech on state television, Najib announced that parliament would be dissolved Saturday to pave the way for the hotly-anticipated poll.

"We have delivered and we will continue to deliver," he said. "I seek your mandate for Barisan Nasional to rule for another five years."

Following the dissolution, the election commission will announce the date for the polls in the coming days.

The coalition has been in power since independence from Britain in 1957 but its support has been dropping in recent years. A scandal surrounding sovereign wealth fund 1MDB that captured global headlines has added to its problems.

Billions of dollars were allegedly looted from the fund in an audacious campaign of fraud and money-laundering which is being investigated in several countries, and it is claimed that large sums ended up the personal bank accounts of Najib.

The leader and the fund deny any wrongdoing.

Najib's United Malays National Organisation (UMNO), the main coalition party, has clung on to power by pushing policies that favour the Muslim Malay majority. It was already struggling after losing the popular vote in the 2013 election for the first time in history.

Voters had become increasingly disillusioned over recurring graft scandals, divisive racial politics in the country which is home to substantial ethnic Chinese and Indian minorities, and the rising cost of living.

Despite the problems, the 64-year-leader is tipped to win another five-year term at the head of the coalition after weathering the 1MDB scandal, sacking critics inside government and launching a crackdown that has seen opponents arrested.

Najib has also been helped by an improving economic picture in recent times, and has been seeking to ensure victory by announcing generous handouts to low-income groups, civil servants and farmers.

His government stoked further criticism last week by pushing a controversial redrawing of the electoral map through parliament which critics say will tilt the poll in Najib's favour. MPs also passed a law banning "fake news" that could see offenders jailed, which some fear could be used to crack down on dissent.

Victory is however less certain due to the comeback of Mahathir, 92, who has turned on his former protege Najib over the 1MDB scandal.

In a stunning political volte-face, he was named the prime ministerial candidate in the opposition coalition Pact of Hope, which is filled with parties he crushed during his 22 years in power.

Mahathir has long championed the Malay cause and the opposition hopes he can win over Muslim voters disillusioned with BN, to add to their support base of urban voters and ethnic minorities, particularly the Chinese.

The ex-leader's political rebirth has raised eyebrows, however, particularly his reconciliation with former nemesis Anwar, a key leader in the opposition.

Anwar was heir apparent to Mahathir until the premier sacked him in 1998 over political differences, and he was then jailed on charges of sodomy and abuse of power. He was jailed again in 2015 on charges his supporters say are trumped up.

While 1MDB has captured global headlines, key issues in the Malay heartland in the country of 32 million people are rising living costs and the economy.

The government lost a vital two-thirds parliamentary majority, needed to amend the constitution, in the 222-seat parliament at the 2008 election and is hoping to win it back. Some 14.9 million people are registered to vote.