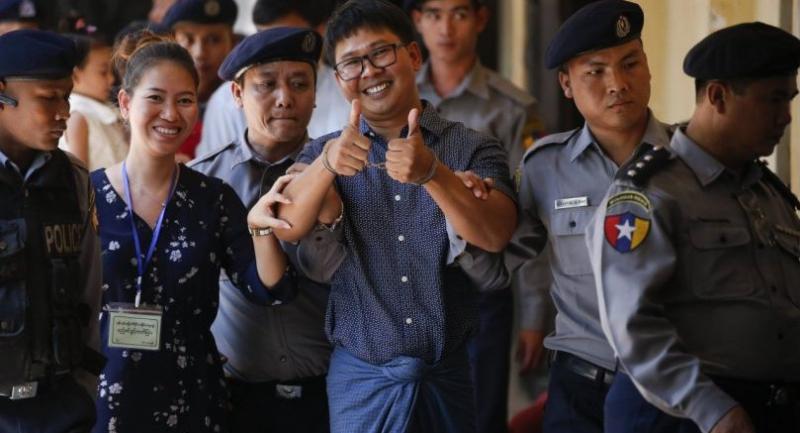 Detained Reuters journalist Wa Lone (C) gives a 'thumbs up' gesture while escorted by police in handcuffs as he arrives to court in Yangon, Myanmar, on April 11.//EPA-EFE

Yangon - A Myanmar court on Wednesday rejected a motion to drop a case against two Reuters journalists arrested months ago while reporting on the Rohingya crisis, pushing ahead with hearings that have sparked global outrage and fears of shrinking press freedoms.

"The court decided that the proposal from the defendants' lawyer to release the defendants...has been rejected," judge Ye Lwin told a courtroom in the commercial capital Yangon packed with supporters, family and media.

Myanmar has faced global condemnation and accusations of extrajudicial killings, ethnic cleansing and genocide as some 700,000 Rohingya Muslims have fled Rakhine to Bangladesh following a military crackdown on insurgents.

The government rejects the allegations and says it was defending itself against attacks from the Arakan Rohingya Salvation Army, which occurred on August 25.

The Reuters pair had been investigating a massacre of 10 Rohingya men on September 2 in the Rakhine village of Inn Din that was carried out by security forces and local villagers.

Seven Myanmar soldiers have been sentenced to jail with hard labour for their part in the killings, according to a Facebook post by the army chief late Tuesday.

The case against the journalists has proceeded despite international calls for their release. Last month Reuters announced that prominent rights attorney Amal Clooney had joined the legal team.//AFP