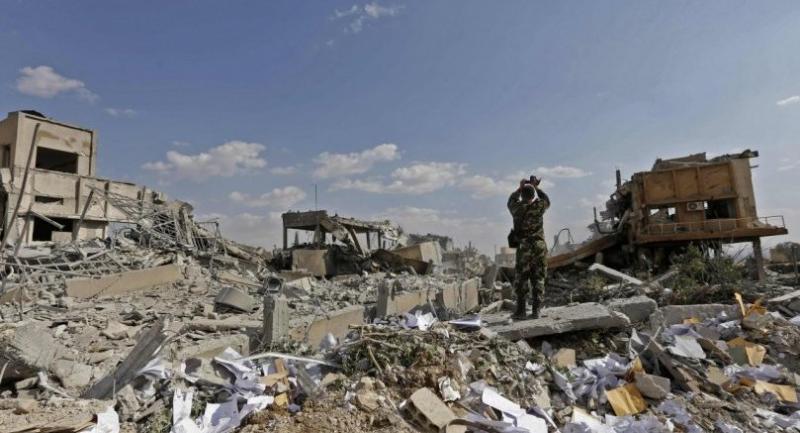 A Syrian soldier takes a picture of the wreckage of a building described as part of the Scientific Studies and Research Centre (SSRC) compound in the Barzeh district, north of Damascus. // AFP PHOTO

International inspectors were to begin work Sunday at the site near Damascus of an alleged chemical attack that prompted an unprecedented wave of Western strikes against Syria's regime.

US, French and British missiles destroyed sites suspected of hosting chemical arms development and storage facilities but the buildings were mostly empty and the Western trio swiftly reverted to its diplomatic efforts. Washington trumpeted the total success of the biggest international attack on President Bashar al-Assad's regime but both Damascus and Syria's opposition rubbished its impact.

A team of chemical experts from the Organisation for the Prohibition of Chemical Weapons, based in The Hague, arrived in Damascus hours after the strikes.

They have been tasked with investigating the site of an April 7 attack in the town of Douma, just east of the capital Damascus, which Western powers said involved chlorine and sarin and killed dozens.

"The fact-finding team arrived in Damascus on Saturday and is due to go to Douma on Sunday," Syrian Deputy Foreign Minister Ayman Soussan told AFP.

"We will ensure they can work professionally, objectively, impartially and free of any pressure," he said, adding he was confident the experts would prove chemical weapons were never used.

The OPCW itself had declared that the Syrian government's chemical weapons stockpile had been removed in 2014, only to confirm later that sarin was used in a 2017 attack in the northern town of Khan Sheikhun.

The inspectors will face a difficult task, with all key players having preempted their findings, including Western powers that justified the strikes by claiming their already had proof. This picture taken on April 14, 2018 shows the wreckage of a building described as part of the Scientific Studies and Research Centre (SSRC) compound in the Barzeh district, north of Damascus, during a press tour organised by the Syrian information ministry. The United States, Britain and France launched strikes against Syrian President Bashar al-Assad's regime early on April 14 in response to an alleged chemical weapons attack after mulling military action for nearly a week. Syrian state news agency SANA reported several missiles hit a research centre in Barzeh, north of Damascus, "destroying a building that included scientific labs and a training centre". // AFP PHOTO

The OPCW team will also have to deal with the risk that evidence may have been removed from the site, which lies in an area that has been controlled by Russian military police and Syrian forces over the past week.

"That possibility always has to be taken into account, and investigators will look for evidence that shows whether the incident site has been tampered with," Ralf Trapp, a consultant and member of a previous OPCW mission to Syria, said.

The Syrian military late Saturday declared Eastern Ghouta, the formerly rebel-held enclave of which Douma is the main town, fully retaken after a blistering two-month assault.

Wresting back the opposition stronghold on his doorstep had been a priority for the resurgent Assad and, combined with the limited scope of Saturday's strikes, the victory declaration yielded ecstatic editorials in state media.

"Damascus came out more powerful and Bashar al-Assad is more than ever an Arab and international leader," the pro-regime Al-Watan daily wrote.

US President Donald Trump hailed the pre-dawn strikes that lit up the sky around Damascus as "perfectly executed" and exclaimed "Mission Accomplished" on Twitter.

According to US officials, the operation involved three US destroyers, a French frigate and a US submarine located in the Red Sea, the Gulf and the eastern Mediterranean.

The Pentagon said no further action was planned but Washington's envoy to the United Nations, Nikki Haley, warned that the US was "locked and loaded" should another gas attack occur.

A Western draft resolution obtained by AFP at a meeting of the UN Security Council Saturday calls for unimpeded deliveries of humanitarian aid and enforcement of a ceasefire and demands that Syria engage in UN-led peace talks.

French President Emmanuel Macron and other Western leaders have called for a diplomatic offensive to follow the strikes in a bid to end a conflict that has killed more than 350,000 people in seven years and displaced half of the population of Syria.

Russia has blocked countless resolutions against its Syrian ally however and the regime has appeared determined to continue its inexorable military reconquest of the country.

"For all the sound and fury of these strikes, their net effect is a slap on the wrist of Bashar al-Assad," said Nick Heras, an analyst at the Center for a New American Security.

Regime and allied forces are now expected to train their sights on southern districts of Damascus that are still held by the Islamic State jihadist group.

They are then likely to tackle the southern province of Daraa, where protests against he rule of Assad, who has been in power 18 years, broke ou in 2011.