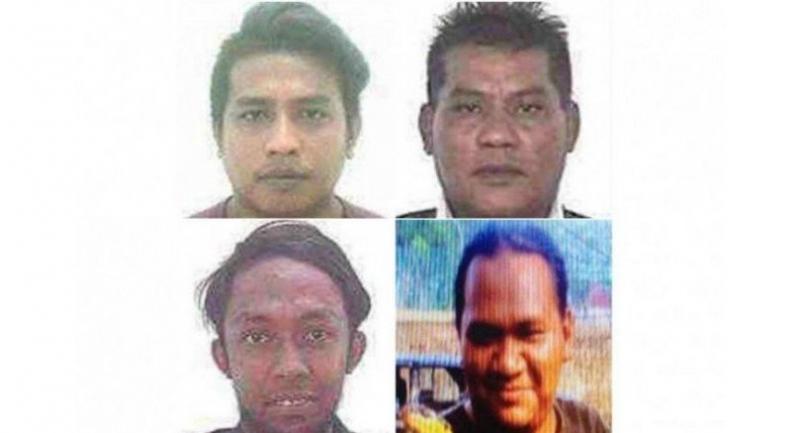 Malaysian police are hunting for four militants suspected of planning attacks on non-Muslim places of worship, as well as to kidnap and murder police officers.

Malaysia's police chief Mohamad Fuzi Harun said in a statement on Monday (April 16) that six members of the Islamic State in Iraq and Syria (ISIS) cell were arrested between Feb 27 and March 1.

But four others were still on the run. Police said the men were "dangerous" and "capable of launching attacks that could pose a threat to national security". Clockwise from top left: The suspects listed were named as Muhamad Faizal Muhamad Hanafi, Muhamad Hanafi Yah, both of whom are from Kelantan state, Awae Wae-Eya, a Thai national living in southern Thailand and Nor Farkhan Mohd Isa, whose address was given as being in southern Johor. (Courtesy of Royal Malaysian Police/-)

A third suspect is Nor Farkhan Mohd Isa, whose address was given as being in Taman Ungku Tun Aminah in Skudai, southern Johor.

The fourth suspect is Awae Wae-Eya, a Thai national living in Narathiwat province in southern Thailand.

"We have been monitoring the cells for the last few months. We are asking the public to share with us if they have any information on the whereabouts of these four suspects. They should approach the police if they know anything," Bukit Aman Special Branch's Counter Terrorism chief Ayob Khan Mydin Pitchay told The Straits Times.

Intelligence sources say they believe Awae is the group's mastermind, based on interrogation of the six men arrested, and that he is trying to establish an ISIS cell in southern Thailand.

The arrests of the other members of the terror cell, which included two men working as janitors in Singapore, were previously announced on March 24.

The plot was uncovered after Malaysian counter-terrorism police, aided by their Singaporean counterparts, detained the terrorists in a series of swoops.

The order to kidnap and kill policemen was the first of its kind, according to an intelligence source.

The six men who were nabbed earlier included a 37-year-old technician who was initially thought to have masterminded the plans to attack places of worship in Johor Baru.

The second suspect, a 49-year-old security guard, was the cell's adviser and responsible for keeping the cell and its plans secret.

Also picked up during the raids was a 30-year-old security guard, who was tasked with acquiring firearms from a neighbouring country and scouting for non-Muslim houses of worship to target.

Another suspect, a 25-year-old waiter, had been ordered to kidnap and kill policemen.

Two others, aged 23 and 22, were arrested on March 1 and worked as janitors in Singapore. One of them acted as the intermediary in the purchase of firearms for the cell, while the other was picked up to facilitate police investigations.

A member of the Abu Sayyaf group in the Philippines was also arrested during the police crackdown, in Sabah, on March 15.

The 31-year-old man is said to be a trusted lieutenant to Furuji Indama, the group's leader based in Basilan. Believed to have connections to Malaysian militant Mahmud Ahmad, he is also wanted by Philippines authorities for involvement in a kidnap-for-ransom syndicate. He is an expert in making improvised explosive devices and had planned to attack several locations in Sabah.

Malaysia has arrested nearly 400 people since 2013 for suspected links to terrorism.

The Muslim-majority nation faces threats from self-radicalised ISIS sympathisers at home, and regional militant groups which seek funding and refuge in South-east Asia.

Malaysia's only terrorist attack took place in June 2016, when two men on a motorcycle lobbed a grenade into a nightclub in Selangor, injuring eight people. The men were sentenced to 25 years' jail each.