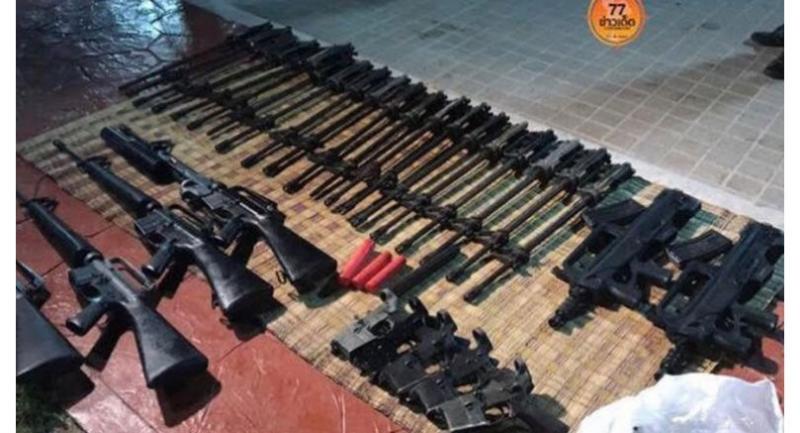 Thai authorities confiscated a number of weapons and equipment on Tuesday believed to have been smuggled from Cambodia. //Cambodia's National Police

Thai authorities have arrested a man suspected of smuggling illegal weapons from Cambodia to Thailand, according to Cambodian National Police.

The weapons seized included two that appear to be Chinese-made Type-95 assault rifles, four M-16s and dozens of rifle parts.

“We have the information, but now we are investigating. We don’t have the details now,” he said. “So far, there is no cooperation request from the Thai side.”

Thai media also reported a potential connection to Thailand’s military, with the suspect – named as Chayut Prasertrit – driving a car that carried a 4th Calvary Regiment sticker. The suspect reportedly confessed to smuggling the weapons and indicated he intended to deliver them to a customer in Thailand.

June and July last year saw a number of arrests of both Thai and Cambodian nationals in relation to cases of weapon smuggling between Cambodia and Thailand. Among those arrested were a first lieutenant at the Ministry of Interior who is a relative by marriage of both Defence Minister Tea Banh and former Koh Kong Provincial Governor Bun Leut, and a Thai police lieutenant.