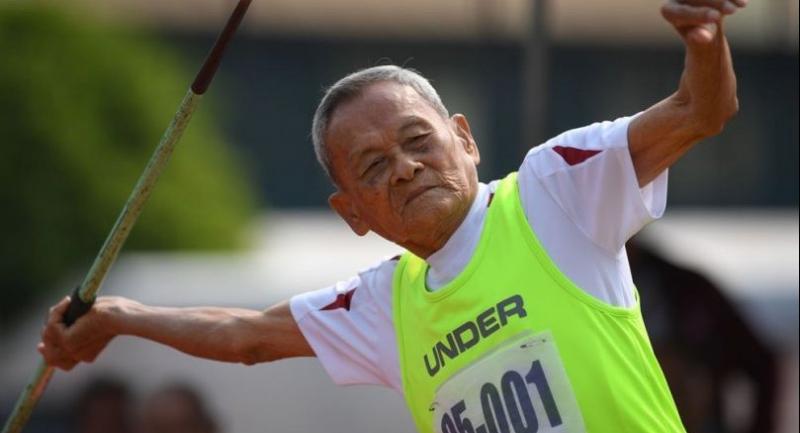 Aged 98 Sawang Janpram cruised to victory in the 100-metre sprint, came first in the discus and set a record in the javelin -- the undisputed star of Thailand's first national Elderly Games held this week.

Competitors who gathered in northern Nan province defied age stereotypes and the searing sun in the government-backed sporting event, organised to promote an active lifestyle among seniors as Thailand tries to stave off an ageing crisis.

"I saw many people my age ailing in bed and I didn't want to be like that. So I began to exercise," the spry Sawang told AFP after setting a record of 15.3 metres in the javelin throw -- albeit as the sole competitor in his 95-99 age category.

Back in his hometown in eastern Thailand, he has watched as his less active peers "all passed away," the former school principal explained with a wry chuckle.

Thailand's population is getting older, and fast, posing risks to the middle-income country's social and medical services as well as its economic productivity.

By 2031, the percentage of the population over 60 is expected to nearly double to 28 percent, according to the National Economic and Social Development Board.

"Now Thailand is a fully-fledged ageing society it's the right time and place to hold these activities," Nattavuth Ruengves, deputy governor of the Sports Authority of Thailand, told AFP on the sidelines of the competition.

The event, which concludes Friday, aims to boost healthcare among seniors, with the added social draw of competitors enjoying the opportunity to meet friends.

Held in an outdoor sports complex, the atmosphere was festive, with cheering crowds and athletes helping each other after they crossed the finish line.

"It doesn't matter if I get a medal or not, I feel happy to see friends competing together," said Duangpee Sansing, the 81-year-old winner of a 400-metre race.

"I am not that tired because I am happy," she told AFP as she hugged a friend and fellow runner.

The seven-day event drew more than 1,000 athletes from across the country.

They battled it out in sports as far apart as football, body building and ballroom dancing to sepak takraw, a traditional volleyball game in which players use their feet instead of hands.

The age groups competing ranged from those approaching middle age to Sawang's bracket, 95 to 99.

The 98-year-old participated in an unofficial version of the event organised last year by the Senior Citizens Council.

He also represented Thailand at a regional elderly games held in China last year where he broke a record for the shot-put, according to his daughter.

Determined to excel again this time around, he has stayed in shape with a daily walking regimen.

Although his athletic prowess helped him blitz his rivals with a 24.59 second dash to claim the 100-metres, Sawang said the event was more about camaraderie than crowing.

"I want to be here to meet many friends and most of the athletes here are nice and helpful -- it makes me feel warm inside," he said.