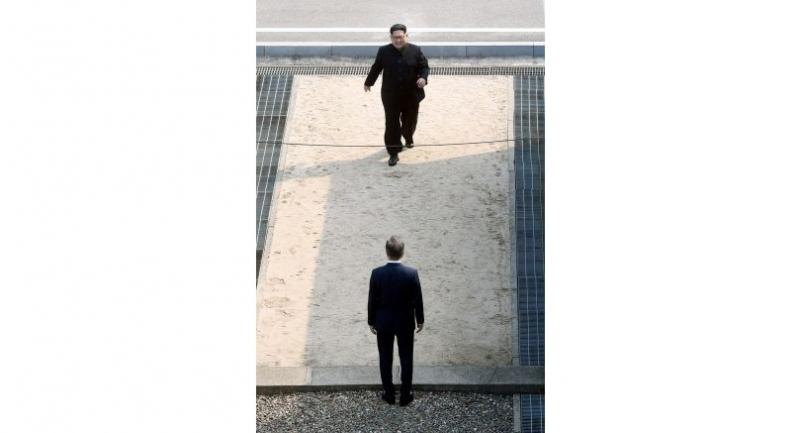 North Korean leader Kim Jong Un was "flooded with emotion" as he walked into the neighbouring South, he told his host Moon Jae-in as they began the first inter-Korean summit for more than a decade.

Walking across the cement blocks that mark the border was "so easy," Kim said, making him wonder "why it took so long to do so after 11 years," referring to the last summit in Pyongyang in 2007.

Kim is the first North Korean leader to set foot on the South's territory since the 1950-53 Korean War ended in a ceasefire.

At the Peace House venue in the heavily fortified truce village of Panmunjom in the Demilitarized Zone, Kim said: "I walked about 200 metres, flooded with emotion."

A new period in inter-Korean history was beginning, he told Moon.

"I came here determined to send a starting signal at the threshold of a new history," he said, promising a "frank, serious and honest mindset".

At the two previous summits in 2000 and 2007, Kim's father and predecessor Kim Jong Il met the then South Korean leaders with much fanfare, but ties soured after conservative administrations took power in Seoul in 2008 and Pyongyang accelerated its banned nuclear weapons and ballistic missile programmes.

Kim suggested that he had been aware of scepticism over the latest summit and vowed to produce a lasting deal.

"No matter how good agreement or statement we produce here, if it is not implemented properly... it will only lead to disappointment," Kim said.

"Unlike in the past when we failed to follow up and went back to where we had once started, I'd like to meet the expectations of the people," he added, promising a "frank, serious and honest mindset".

Moon voiced "admiration" for Kim's "bold decision" to walk to the South, and hoped they would reach "a bold agreement so that we may give a big gift to the whole Korean people and the people who want peace".

"I think both of us feel a heavy weight on our shoulders," Moon told Kim.

"When you crossed the military border for the first time, Panmunjom became a symbol of peace, not a symbol of division."

Pyongyang brought a top chef to Panmunjom to cook the cold noodles, and Kim said he hoped that Moon will "enjoy our Pyongyang naengmyeon brought from afar."

"Oh, I shouldn't say 'afar'," he added, prompting laughter from officials and Moon.