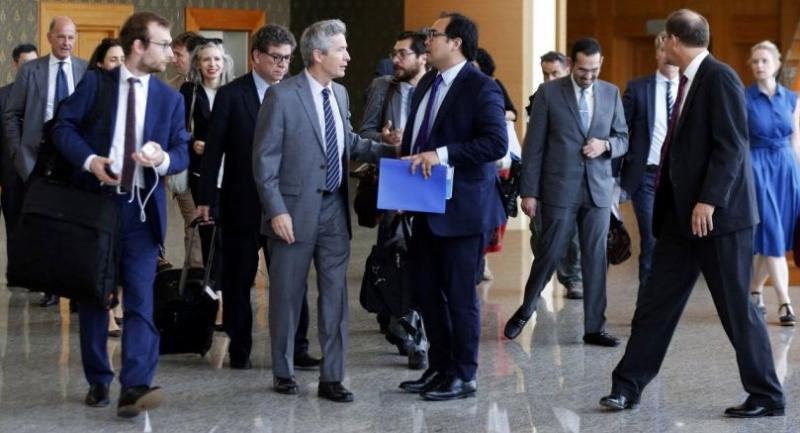 Myanmar's Aung San Suu Kyi received a UN Security Council delegation Monday in the highest-level diplomatic visit since the start of the Rohingya crisis, which will include a brief tour of violence-hit Rakhine state.

Suu Kyi, the de facto leader of mainly Buddhist Myanmar, has been pilloried overseas for her failure to speak up for the Muslim Rohingya or publicly condemn the army for driving them out of the country.

On Monday afternoon she chaired a meeting of 15 UN delegates, according to a Ministry of Information photograph, as the UN tries to put more pressure on Myanmar to allow refugees to return safely.

The UN delegates will travel by helicopter Tuesday over the scarred landscape of northern Rakhine state, the scene of an army campaign starting last August that drove around 700,000 of the minority into neighbouring Bangladesh.

Their visit to Myanmar comes after an emotionally-charged stay in Bangladesh where Rohingya refugees told delegates of their trauma.

As they left Bangladesh, delegates said they would press Myanmar to ensure the safe return of those who fled.

"This is a humanitarian crisis and a human rights issue," Kuwait's ambassador to the UN, Mansour al-Otaibi, told reporters before flying to Myanmar's capital Naypyidaw.

The Rohingya fled after Myanmar's army carried out "clearance operations" which it says targeted militants.

But civilians have given consistent testimony of mass murder, rape and arson after fleeing an army that burned hundreds of their villages to the ground.

However, deputy Russian ambassador Dmitry Polyanskiy, whose country has supported Myanmar, warned on Sunday that the council did not have a "magic stick" solution.

"We are not looking away from this crisis, we are not closing our eyes," he said.

Bangladesh and Myanmar signed a repatriation agreement in November but no refugees have returned so far.

"We want restoration of our citizenship under Rohingya ethnicity. We want security and return of our confiscated land and properties," said Rohingya leader Mohibullah.

The Rohingya have been persecuted for decades in Myanmar, where they are widely regarded as illegal immigrants from Bangladesh and denied ctizenship.

Myanmar's military has kept Rakhine in a lockdown since August, blocking access to independent observers, journalists and many aid groups except on tightly-controlled chaperoned trips.

The UN Security Council has called for the safe return of the Rohingya and an end to discrimination against them but has not been able to access northern Rakhine until now.

Yangon-based independent analyst David Mathieson described the visit as "symbolically quite important" but doused hopes of any immediate diplomatic breakthrough.

He said Suu Kyi's government was grudingly showing "some semblance of cooperation with the West" to "avert further pressure from international justice initiatives".