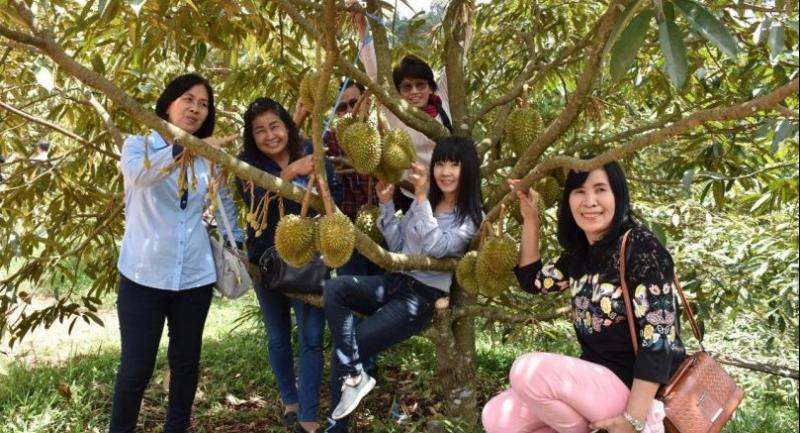 By Boonpim Baiya
The Nation

The northern province of Uttaradit, the original source of the famous Long Lap Lae and Lin Lap Lae durians, has opened its durian fields to lovers of the “King of Fruit” and this year there’s a bonus: buyers do not even have to carry the fruit home because the planters have set up a mail service for them.

Governor Sathienpong Maksiri recently chaired a Durian Festival in Laplae district, where the highlight were the Long Lap Lae and Lin Lap Lae durians that are renowned as being the most expensive and the most delicious of all durians.

Prices of both famous types start at a minimum of Bt500 per kilogram, while the festival also showcased various other types of Durians, such as the Kanyao. It is expected that the total spend at the festival would reach Bt1 billion.

The governor took the first official group of durian lovers to a viewing spot at Huay Rua, where they could see three provinces of Uttaradit, Sukhotai and Phrae.

Long Lap Lae and Lin Lap Lae were planted in about 33,000 rai of land up on the hill in the district and are free of chemicals.

The governor said a group of durian planters in Tambon Mae Poon introduced two styles of trip for visitors to Doi Lap Lae. The first was a group trip travelling on the back of a pickup and the second were rides on the backs of motorcycles

Any buyers could order the fruit, pay and go home without having to worry about how to transport the fruit, the governor said, because the planters had agreed to mail the fruit for them.

For those who were not able to go to Doi Lap Lae, they can still sample the fruit by visiting a fair on May 20 at Uttaradit Town hall when both famous durians will available to taste and buy.