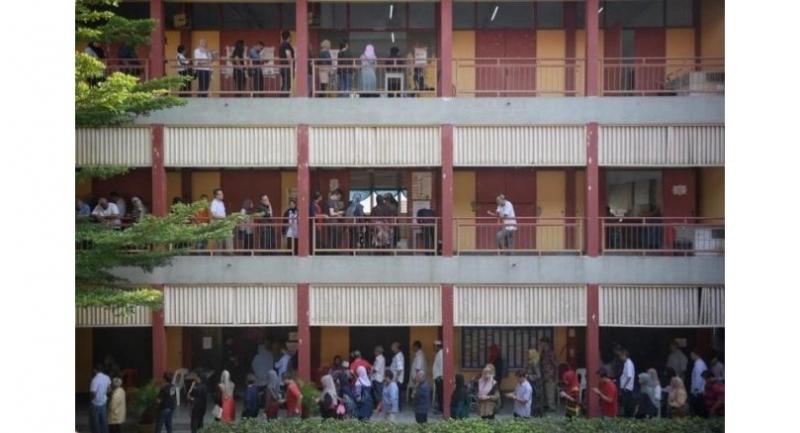 Malaysians across the country have begun casting their votes for what has been dubbed "the mother of all elections", an election which could see the country's first change in administration in 60 years.

Polling begins at 8am on Wednesday (May 9) at 8,253 polling stations which will remain open until 5pm. There are around 15 million eligible voters.

Results will start trickling in from 9pm. But a fuller picture will only be clear after midnight.

This newspaper's team of journalists on the ground reported long queues of voters at some of the polling stations. There are also reports of voters receiving ballot papers without the official stamp, which makes their votes invalid.

Party leaders made last-ditch appeals to Malaysia's 15 million voters on Tuesday (May 8). While Prime Minister Najib Razak made an appearance on national television for the second evening in a row, his mentor-turned-nemesis Mahathir Mohamad turned to streaming his final rally speech online.

Two pollsters yesterday found that neither side has been able to secure a comfortable lead after an intense 11-day campaign.

Leading opinion researcher Merdeka Center and think-tank Ilham Centre agreed that PH was in the lead on the peninsula, but said the opposition would need a last-minute surge of support to win the lion's share of seats, which are "too close to call", to overcome BN's expected sweep of East Malaysia.

"We found that Barisan Nasional presently retains a sizeable seat advantage. The high number of marginal seats implies that voter turnout will be a critical factor in determining the outcome of many seats on Election Day," said Merdeka Center.

He vowed in a speech televised live across several state and private stations to waive income tax for those aged 26 or younger, and toll fares for all expressways for five days during next month's Hari Raya Aidilfitri celebrations, if BN were to be given a fresh mandate.

"I want all Malaysians to wake up to a happy Malaysia," the BN chief said in his hometown seat of Pekan, Pahang.

He also said that next Monday and Tuesday would be public holidays - or Sunday and Monday for states where the weekend begins on Friday - so Muslims could start the fasting month with their families.

In Langkawi, the island that Dr Mahathir developed into a tourism hub during his 22 years in power, the former premier insisted that Malaysia would have been a developed nation by 2020 were it not for Mr Najib's nine years at the helm. "Unfortunately, the government of the sixth prime minister has been a disaster," he said.

The opposition overcame its lack of airtime on mainstream media by broadcasting the 92-year-old's address on Facebook Live, and at rallies nationwide prior to the midnight close of the campaign.

Malaysia's 14th general election has become increasingly difficult to call in recent weeks, borne out by polling data suggesting that PH has gained on BN, despite earlier expectations that Mr Najib would cruise to victory with the Islamic Parti Islam SeMalaysia splitting the anti-BN vote.

Most observers expect the ruling coalition to lose the popular majority again, but due to the first-past-the-post system, it can still control Parliament and form the government after today's vote.