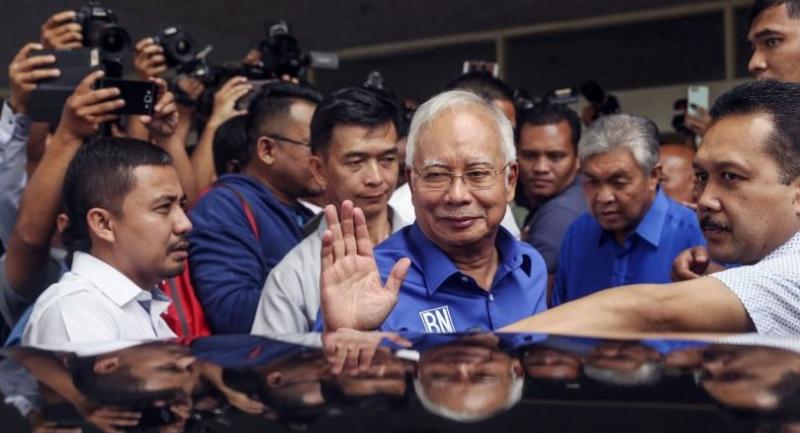 Kuala Lumpur - Billions of missing dollars, an angry population and a powerful new prime minister who has vowed to bring justice to Malaysia do not bode well for Najib Razak, who was turfed from power by an electoral earthquake this week.

Voters came out in force to topple the scandal-plagued leader and the increasingly authoritarian regime that had led the country uninterrupted for more than six decades, handing power to an opposition alliance headed by ageing former autocrat Mahathir Mohamad.

But for the ex-premier, the result could mean more than just the end of his political career -- Mahathir has vowed to launch investigations into a headline-grabbing controversy in which Najib is implicated in plundering billions of dollars from sovereign wealth fund 1MDB.

At a press conference after his shock win, Mahathir -- who had previously ruled Malaysia for two decades and staged a comeback to oust his former protege Najib -- vowed to "retore the rule of law".

The fund, 1Malaysia Development Berhad (1MDB), was set up by Najib when he came into office in 2009 ostensibly to promote Malaysia's economic development, but allegations soon surfaced that money was missing.

The scandal exploded in 2015 when reports emerged that Najib received $681 million into his personal bank accounts. A domestic investigation cleared him and concluded the money was a donation from the Saudi royal family, and he has denied any wrongdoig.

But the US State Department has alleged in civil lawsuits that $4.5 billion was looted from the fund, and used to buy everything from high-end US real estate to artworks and a luxury yacht.

After being booted out as premier and losing the protection of high office, speculation has been mounting that Najib and his wife Rosmah Mansor, a hugely unpopular figure due to her reported love of costly luxury shopping trips, might flee.

But analysts and politicians played down this possibility saying Najib would likely stay in Malaysia -- at least in the short term -- until the dust had settled in his party, the United Malays National Organisation (UMNO), and in any case there were unlikely to be many countries willing to accept him.

"He does not have lots of options," James Chin, a Malaysia expert from the University of Tasmania, told AFP.

"The only countries that may give him political asylum will be somewhere in the Middle East."

Charles Santiago, an MP from the Democratic Action Party, part of the new ruling alliance, said that Najib was still the head of the long-ruling Barisan Nasional (BN) coalition and would want to hold the fort for at leat a while.

He also said fleeing was unlikely as "other countries won't touch him because of 1MDB".

Mahathir told reporters this week he believed the new government could get back most of the money stolen from 1MDB."We have to increase the confidence of investors in this administration," he said.

He has also indicated that Attorney-General Mohamed Ali Apandi, who cleared Najib over the scandal and closed down domestic investigations, was already in the cross-hairs of the new administration.

But Chin said it was unlikely anything would happen to Najib immediately with regard to 1MDB, as the new government would want to show it was following due process.

"They will have to institute a proper investigation," he said.

Najib's position as head of both UMNO and BN looked shaky, with rumblings of discontent growing louder as a senior member -- former sports minister Khairy Jamaluddin --  publicly called for "big changes" to be made without delay.

"But there has to be a collective decision including from the president (Najib)," he said.

As for Najib's widely despised wife, Chin said she only had one choice.

"If she wants to be protected, she has to disappear from public view completely," he said.//AFP