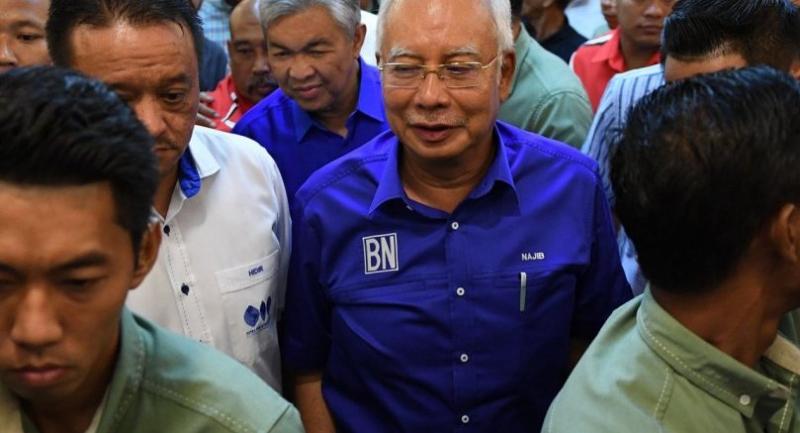 Outgoing Malaysian prime minister Najib Razak of the Barisan National party coalition leaves after addressing the media at the party headquarters in Kuala Lumpur on May 10, 2018/AFP

Former Malaysian prime minister Najib Razak said Saturday he was going to take a "short break" after his shock election loss as speculation mounted the scandal-hit ex-leader was due to jet out of the country.

Journalists descended on an airport near Kuala Lumpur in the morning as reports circulated on social media that Najib and his wife Rosmah Mansor were due to board a private jet and fly to Indonesia.

Najib's long-ruling Barisan Nasional (BN) coalition suffered a shock loss in an election to an alliance headed by Mahathir Mohamad, 92, himself a former premier who came back to take on his ex-protege, Najib.

Since his defeat, there has been speculation Najib and his wife might try to flee the country as the new government has vowed to investigate a massive financial scandal that the ex-leader has been implicated in.

In a series of early morning tweets, Najib said: "I will take a short break to spend time with my family whom I have not seen enough of in recent years.

"I pray that after this divisive period, the country will unite.

"I apologise for any shortcomings and mistakes, and I thank you, the people, for the opportunity to lead our great nation."

He did not give further details about his plans.

Dozens of journalists descended on Subang Airport, a small airport just outside the capital, after what was believed to be a manifest circulated online showing Najib and his wife were due to board a flight to Jakarta on Saturday morning.

Police were guarding the airport.

Some media reports said the pair were on a travel blacklist and would not be allowed to leave.

But the immigration department's director-general Mustafar Ali told AFP: "They are not blacklisted so far."

Mahathir's victory broke the grip on power of Najib's Barisan Nasional (BN) coalition, which had ruled Malaysia uninterrupted since independence from Britain in 1957.

Najib's premiership was battered by allegations he oversaw the plundering of billions of dollars from sovereign wealth fund 1MDB. Najib and the fund deny any wrongdoing.

Mahathir, who is the world's oldest elected leader, has said that the king has agreed to pardon jailed leading politician Anwar Ibrahim, paving the way for his return to politics and to potentially become premier.