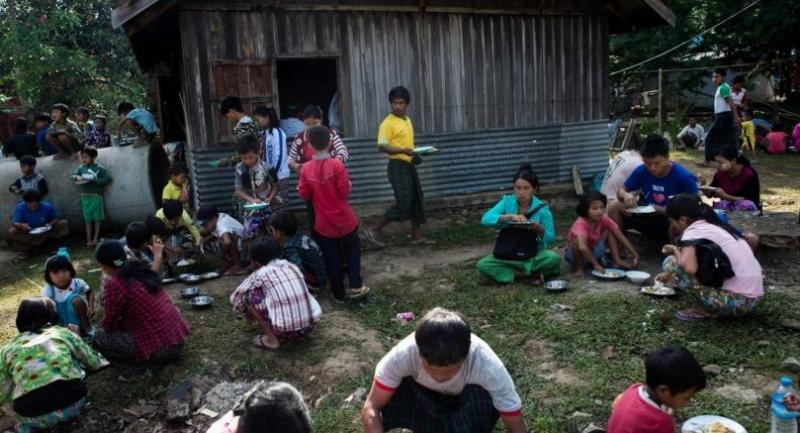 This picture taken on May 11, 2018 shows internally displaced people in a church compound in Myitkyina after fleeing conflict between government troops and ethnic armed group in Kachin state./AFP

Seng Moon grabbed her day-old baby and fled into the thick jungle, joining thousands of villagers escaping fighting between ethnic Kachin rebels and Myanmar's army, now reinforced by a unit notorious for its brutal "clearance" operations.

The insurgency in Myanmar's remote northeast has festered for six decades, but unlike the Rohingya crisis in the far west of the country, it has garnered few global headlines.

Fighting has surged dramatically this year, displacing 20,000 people since January, adding to the legions already uprooted by one of the world's longest-running civil wars.

Often called the "forgotten war", the Kachin conflict is a messy struggle over autonomy, ethnic identity, drugs, jade and other natural resources between the Kachin Independence Army (KIA) and the Myanmar state.

On April 11, with the sound of gunfire and fighter jets closing in, the villagers of Danai township sought refuge in their paddy fields.

Three days later shells started falling on their village and leaders took the decision for the 2,000 inhabitants to flee.

Seng Moon, 22, had given birth to her daughter only the day before.

"I was still bleeding (from the birth) and I felt like I was dying," she told AFP at a camp in Danai town. "It was so difficult and we had to cross a river."

For the group that included many young children, as well as the sick and elderly, progress through the arduous jungle terrain was slow.

But they were lucky to encounter local elephant handlers -- known as mahouts -- who helped ferry the most vulnerable across a chest-deep river to a displacement camp in the grounds of a small, wooden church.

Ethnic Kachin are mainly Christians in a nation that is overwhelmingly Buddhist.

International focus has been on the crisis in Rakhine state, from where some 700,000 Rohingya Muslims have been driven into Bangladesh by a relentless military campaign the UN says amounted to "ethnic cleansing".

An army unit accused of atrocities against the Rohingya -- the 33rd Light Infantry Division -- has now been redeployed to Kachin.

While the scale of violence in Kachin does not match operations against the Rohingya, experts say the deployment of the unit is an ominous sign for civilians.

"Yes, they are here," Kachin state minister for security and border affairs, Colonel Thura Myo Tin, told AFP without giving any further details about their mission.

Human Rights Watch accuses the unit of "multiple massacres" in northern Rakhine while Amnesty International has recorded "violations" against civilians on previous missions to Kachin.

The insurgency in the northeast is one of two dozen ethnic minority rebellions that have plagued Myanmar since independence from British colonial rule in 1948.

The Kachin conflict reignited in 2011 after a 17-year ceasefire collapsed. Clashes have intensified since 2016, displacing more than 100,000 in Kachin and the north of neighbouring Shan state.

Independent analyst David Mathieson said the military appears to be taking advantage of the focus on the Rohingya to attack the KIA and bring it "to the peace negotiation table".

The military is also "targeting the KIA's sources of income" in amber and jade mining areas, he added.

Myanmar's army accuses the KIA of involvement in an attack at the weekend on security posts and a casino in Shan that left at least 19 dead.

The military says it is protecting the country's sovereignty and borders. But the KIA's political wing has a different view.

"They are invaders. We are defenders," said Dau Hka, a spokesman for the Kachin Independence Organisation (KIO).

"The fighting will stop immediately" once the military halts its offensive, he added.

The Kachin conflict is a powerful rallying cry in a country whose citizens suffered under decades of junta repression.

Youth groups have led peace protests that spread from Kachin's capital Myitkyina across the country.

Three protest leaders in Kachin have also fallen foul of the law after an army officier filed a defamation case against them -- a charge that carries up to two years in jail.

For now church grounds around Myitkyina are providing sanctuary to those able to escape remote villages.

Sin Na Khawn Bu's family says she is over 100 years old and was carried some 30 kilometres (19 miles) by her grandson to safety.

"I have not been able to eat well for 12 days because I'm so afraid," the centenarian told AFP, stuttering and rocking back and forth as she spoke.

"We are suffering a lot. Please help us."