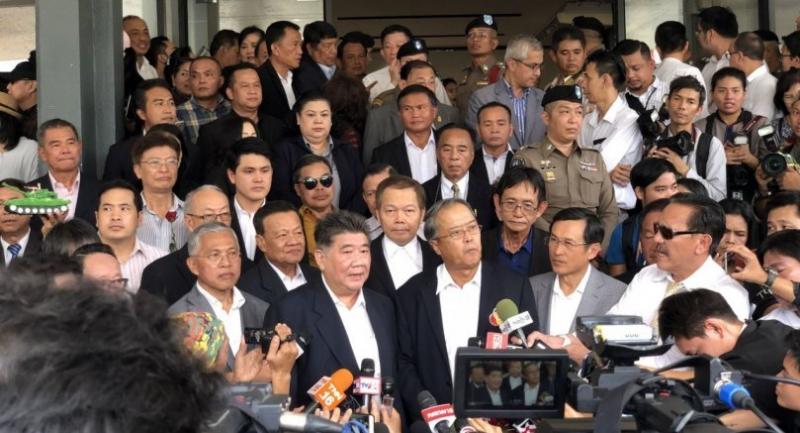 Eight key figures from the Pheu Thai Party on Monday met police as summoned on criminal charges in connection with their press conference held ahead of the fourth anniversary of the 2014 coup.

They had all denied the charges after being interrogated by deputy national police chief Pol General Srivara Rangsibrahmanakul at the Crime Suppression Division (CSD). “If that is not the case, the police deserve to get counter-sued,” he said, referring to a Pheu Thai threat of legal action if they were unfairly charged.

He added that all would be freed unconditionally after questioning, and the eight were indeed later released after four hours in custody.

Chaturon said upon reading the police documents, he suspected the case had been hastily put together without sufficient supporting evidence. Last Thursday, officials from the NCPO filed a complaint with the CSD against the Pheu Thai politicians.

They are accused of violating the junta ban on political gatherings of five or more people, inciting civil commotion or sedition, and entering false information into a computer system.

Last Thursday Pheu Thai called a press conference to deliver a five-page statement, accusing the junta of failing to achieve key pledges made when staging the coup four years ago, including reconciliation, fighting corruption, protecting rights and democracy, and improving the economy.

“The past four years under the NCPO are taking the country into a dark and dangerous future. ... It is the duty of all Thai people to return to a constitutional monarchy and not allow the absolute regime to destroy democracy any further,” the statement said.