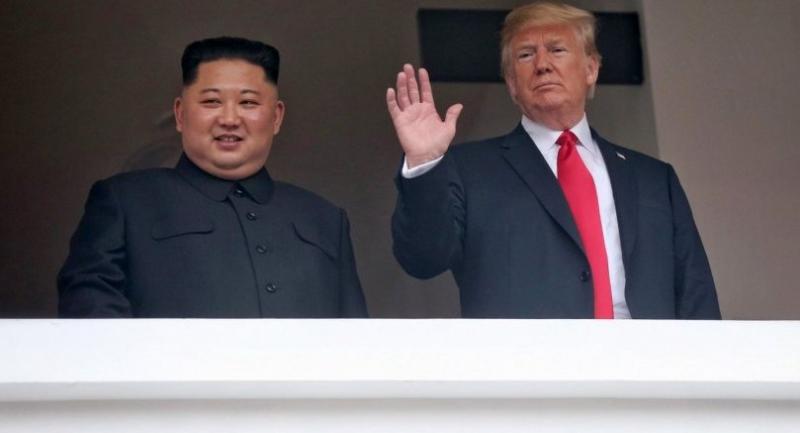 Singapore - Here is a look back at the diplomatic rollercoaster that took President Donald Trump and North Korea's Kim Jong Un from rhetorical warfare to Tuesday's unprecedented summit in Singapore.

On January 2, 2017, weeks before taking office, Trump vows North Korea will never be allowed to develop a nuclear weapon capable of reaching US territory.

The following month, Trump threatens "fire and fury" if Pyongyang continues to threaten America, kicking off months of saber-rattling that set the world on edge.

Undeterred, Pyongyang weeks later test-fires a ballistic missile over Japan, and on September 3 carries out its sixth, "perfect" nuclear test.

On September 21, 2017, Washington unveils a raft of tough sanctions to curb North Korea's nuclear and ballistic missile programme, two days after Trump's maiden speech to the UN General Assembly in which he dubs Kim a "Rocket Man" on a "suicide mission".

He later boasts his missile arsenal can hit any city on the US mainland, warning in a New Year address that he has a "nuclear button" on his desk. Trump responds by saying his own nuclear button is "much bigger and more powerful".

Following years of tensions, South Korea's hosting of the Winter Olympics in February 2018 gives the neighbours a window to reopen communications, ushering in a spectacular Korean detente.

As the two Koreas march together for the opening ceremony, the South's President Moon Jae-in shares historic handshakes with Kim's sister Kim Yo Jong, and Trump's daughter Ivanka attends events with top officials from both sides.

Washington makes clear it will keep up the pressure, though, slapping Pyongyang on February 23, 2018, with its largest ever set of sanctions, a move the regime calls an "act of war."

In a remarkable announcement at the White House, on March 8, a top South Korean official announces that Kim will "refrain from any further nuclear or missile tests" and has invited Trump to meet him -- and that Trump has agreed.

The Olympics also pave the way for an historic inter-Korean summit, on April 27, which sees Pyongyang and Seoul promise to pursue the denuclearisation of the peninsula and a permanent peace.

Over the Easter weekend, Trump's CIA chief and nominee for secretary of state Mike Pompeo travels secretly to Pyongyang where he meets Kim and begins to lay the groundwork for the landmark summit.

A month later, Pompeo makes a second unannounced trip aimed at finalising the summit details -- and pressing for the release of three US citizens detained by Pyongyang.

On May 9, Trump announces the three men are headed to the United States and offers effusive thanks to Kim.

The next morning, he reveals the date and location of his meeting with Kim -- Singapore on June 12.

But storm clouds gather on May 16 when North Korea threatens to cancel the summit as it expresses "repugnance" towards Trump's National Security Advisor John Bolton.

Bolton provoked Pyongyang's ire by suggesting it followed Libya's lead on denuclearisation -- evoking memories of the demise of Moamer Kadhafi, killed in a 2011 uprising after agreeing to scrap his nuclear programme.

On May 24, Trump calls off the summit, blaming "tremendous anger" and "hostility" from the North Korean regime.

There are signs of a change of heart when Trump tweets on May 27 that he sees "brilliant potential" in North Korea.

And on June 1, following talks with Kim's right-hand man in the Oval Office, Trump announces the meeting is back on.

In Singapore on June 12, the handshake between the two heads of state is broadcast live around the world.

It is the first-ever meeting between sitting leaders of the two countries.

They sign a document committing to "security guarantees" from Washington and "new US-DPRK relations", referring to the North by its official acronym.//AFP