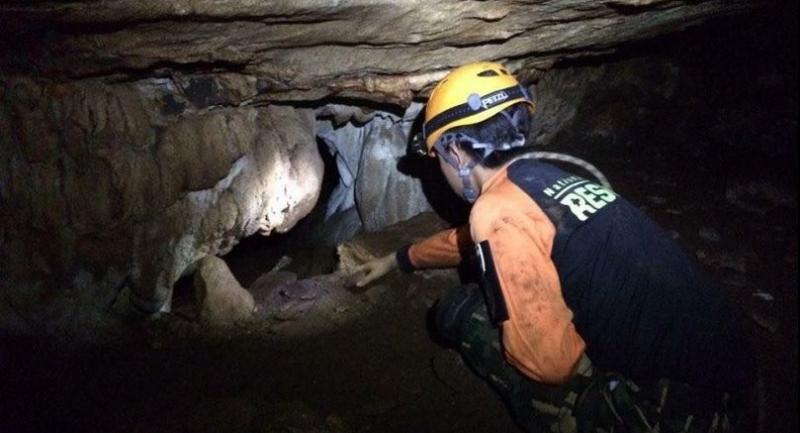 Chanting monks in orange robes prayed alongside distraught relatives outside a flooded cave in northern Thailand where 12 children and their football coach have been trapped for days.

Rescuers battled heavy rain as they struggled to drain the flooded tunnels in the Tham Luang cave where the youngsters, aged 11 to 16, and their coach have been stuck since Saturday. Three British cave-divers who have previously explored the site arrived in Thailand Wednesday to join about 1,000 soldiers, navy SEAL divers, police and park rangers at the mud-slicked site in the northern province of Chiang Rai.

Officials shipped in several high-pressure water pumps overnight to help drain the waterlogged chambers of the cave near the Laos and Myanmar borders, which is several kilometres long.

It was a losing battle as rain kept falling for most of the day, but by evening one of the largest pumps was set up and operating. Murky water and limited oxygen inside the cave also proved difficult for the 200 rescuers inside.

Thailand's SEAL unit said on its Facebook page that water levels rose 15 centimetres (six inches) overnight and that a third chamber of the complex cave network -- believed to be several kilometres long -- was flooded. As the desperate search for the missing boys entered its fifth night, officials said they were still sure they would find them. "We need to do everything to reach these children."

The monks led chants alongside frantic relatives who clung to hope the boys would be found soon.

"I hope that today with the help from all teams he will be saved. I'm certain in my heart," Pean Kamlue, the mother of a 16-year-old boy in the cave, told AFP.

Christian mountaineers joined crowds to sing songs in prayer near a makeshift shrine of flowers and toys close to the cave's entrance.

The dramatic rescue operations have captivated the country and prompted emotional outpourings on social media and from top leaders and royal family members.

Coverage of the harrowing rescue has blanketed Thai media and scores of journalists have descended on the site.

Officials found three new openings on Tuesday, but only one was accessible and they planned to lower rescuers and food in through the hole by air.

But thick fog and strong winds grounded five helicopters on standby in the area.

Soldiers kept surveying the site for new ways into the cave. The youngsters and their 25-year-old coach entered the Tham Luang cave after football practice on Saturday night and are believed to have been trapped when floods triggered by heavy rain blocked the main entrance.

Rescuers think they retreated toward the back of the cave as floodwater inside rose.

Bicycles, football boots and backpacks were found near the cave's main opening and rescuers said they discovered handprints on Monday in one of the chambers which they believe belonged to the group.

The team, dubbed the "Boars", are from the area and know the cave well, officials said.

Photos on the Facebook page of the missing coach Ekkapol Janthawong showed him with young footballers inside the cave in 2016 with the caption "special training before match".

Local visitors frequent the cave in the dry season to worship at the small Buddha statues inside.

A sign at the entrance warns visitors not to enter during the rainy season from July to November.

"All of us must help... everyone has dedicated and risked their lives to help officials and divers," he said.