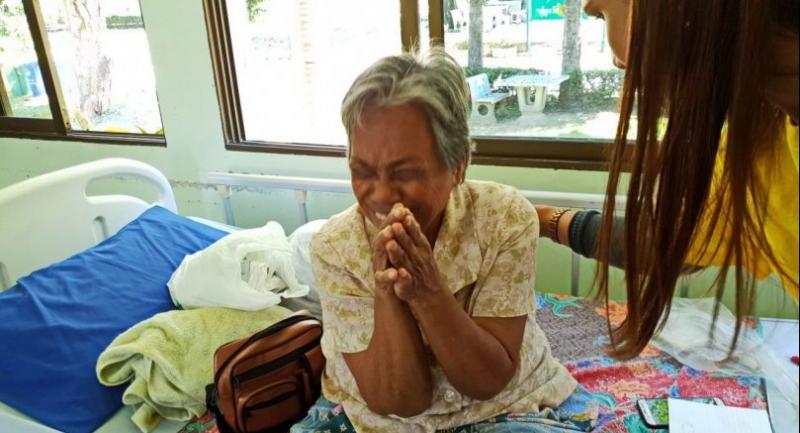 A 78-year-old woman confined to a wheelchair was found to be living in a roadside bus shelter in Chon Buri with her grandson on Thursday and taken to a welfare centre.

The plight of Sawong Singhaklangpol and her grandson, Sarawut Maliphan, 33, was widely shared on Facebook after local people realised the two were camping at the bus stop in Sattahip district. Surasak Attasara , director of a welfare centre for the elderly in Bang Lamung district, went to see them on Thursday morning to offer help. Surasak said the grandma was eligible to stay at the centre for the rest of her life, but he needed the help of government agencies to assist Sarawut, who limps due an injury to his right leg but could still work. Sawong at first resisted being parted from her grandson, who has cared for her in the 15 years since an illness left her unable to walk. She raised him after his father moved away.

Sarawut insisted that his grandmother go live at the centre, where she’d get better care than he could provide. The two told reporters they’d lived in Kanchanaburi with no help from Sarawut’s father, who moved to Sattahip.

Recently, the owner of the land where they lived in a makeshift house evicted them. They earned enough money for van fare to Sattahip, but Sarawut’s father refused to take them in.