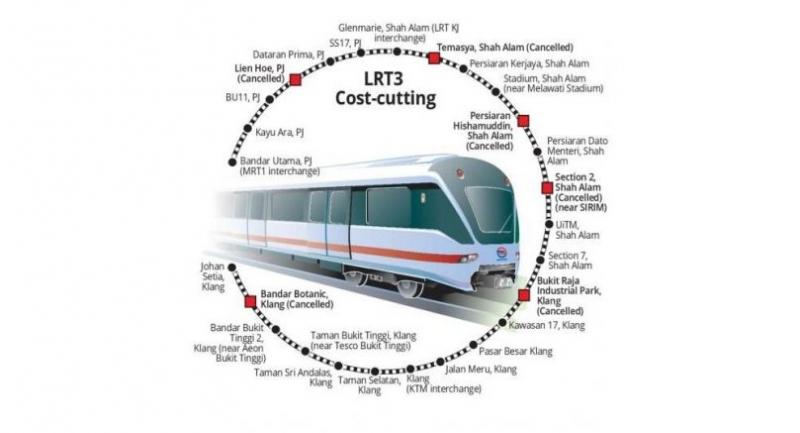 NEWS of the scrapping of six LRT3 stations by the Finance Ministry has drawn mixed reactions from residents living near the stops.

While some welcomed the decision announced by Finance Minister Lim Guan Eng, others believed the stations could have been retained to ease traffic congestion in city centres.

The six stations are Lien Hoe in Tropicana, PJ, Temasya near Glenmarie, Persiaran Hishamuddin and Sirim both in Shah Alam, Taman Perindustrian in Bukit Raja and Bandar Botani, both in Klang.

Among those celebrating the announcement were Temasya Anggun Glenmarie residents who had been strongly against the Temasya station located several metres away from their home.

Temasya Anggun Residents Association chairman Ravindar Singh said they had been opposing the location of the station since September 2017.

They sent letters to the Transport Ministry and the Prime Minister’s office after the recent general election expressing their objection to the station’s location.

“Now that the Temasya station has been scrapped, we hope the government will consider moving the line, 34m away from our homes.

“Even now without the line our homes are close to the road,” added Ravindran.

Construction work for LRT3 is ongoing along Persiaran Kerjaya near Hicom Glenmarie and the Shah Alam Malawati Stadium. — Photos: SSK KANESAN/ The Star

He also said there was no need to have four stations within a kilometre range, the other stations include Glenmarie, Persiaran Kerjaya and Stadium (near Malawati stadium).

“The station is also not a park- and-ride facility which would mean that vehicles will be parked haphazardly around the area causing congestion,” he added.

Meanwhile, a resident in Bandar Botanic in Klang E. Selvamani said it was a shame that the LRT station in the neighbourhood had been cancelled.

“There are 10 precincts in this township plus several low-cost flats that could have benefited from the station.

“People from Port Klang could have used this station too. Although the nearest stations are located in Aeon and Tesco Bukit Tinggi, I think this station could ease the congestion over that side,” she added.

Selvamani said the Aeon Bukit Tinggi and Tesco Bukit Tinggi carparks were always crowded and additional vehicles by LRT users would only increase the congestion.

A station in Bandar Botanic would ease the number of vehicles there, she added.

However Bandar Bukit Tinggi Residents Association chairman Gan Ee Chai said he did not see a problem in the situation.

He said geographically, Bandar Botanic and Bandar Bukit Tinggi were close to each other.

One of the construction sites for the LRT3 in Persiaran Dato Menteri where the Shah Alam Convention Centre is located has been partially closed off.

“As for the parking issue, I believe we have enough for everyone including residents of Taman Botanic. I do not see much of a congestion problem either,” he added

For him, reducing the cost of the LRT3 construction was important to ensure the country was not bogged down financially because of the project.

The LRT3 project is a 37km extension line from Bandar Utama to Klang through Shah Alam. When it was launched in 2015, it was projected to cost RM10bil, including RM1bil for land acquisitions.

The six scrapped stations were part of the government’s cost-cutting measures to bring down the price from RM31.65bil to RM16.63bil.

Apart from the stations, there were other cost-cutting measures including reducing six-car trains to three cars, purchasing 22 trains in total as opposed to 42 initially and extending the completion date from 2020 to 2024 to not have to pay extra costs to speed up the construction time.

Meanwhile Sentosa assemblyman G. Gunaraj believes the stations may still be built, but at a later date.

“So for the Botanic station, I believe it may be built later due to our current economic state. We will continue to look at the viability of the project for the people’s convenience,” he added.

Gunarajah said although it is advisable to build amenities sooner rather than later, this is a small sacrifice Malaysians including him have to make for nation building.