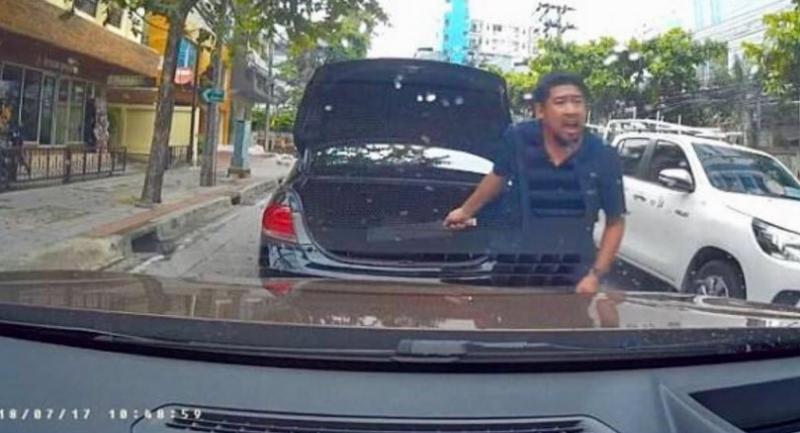 Netizens have condemned a male driver caught on video threatening a female driver with a knife after he drove against the traffic to cut in front of her car.

According to the date stamped on the clip by the woman's dashboard camera, the incident took place on Tuesday at 10am on a Bangkok road with two lanes on each side.

The clip was first posted on YouTube by a woman, who withheld her identity, explaining only that the woman driver was a friend of her mother's and that she had filed a complaint with police.

The clip went viral after it was later shared by popular Facebook page Hia Kub Rot. By 8am on Wednesday, 12 hours after the clip was shared on the page, it had been viewed more than 178,000 times and shared more than 37,000 times. It received over 4,600 reactions and 1,300 comments, most condemning the man.

The clip shows a man at the wheel of a black Toyota Camry, repeatedly trying to cut in front of a car whose dashboard cam is recording the incident, by driving against the traffic.

The man finally managed to complete the illegal overtaking manoeuvre after they drove through an intersection. He then stopped his car, exited, opened the trunk and pulled out a long knife. The dash board video shows him walking towards the woman’s car before he disappears from shot. The person who posted the YouTube clip said he then tried to open the door before giving up, walking back to his car and driving off.

One Facebook user, Banjong Inthawirat, commented that police could arrest the man right away without the need to file a complaint and that he should be banned for life from driving.