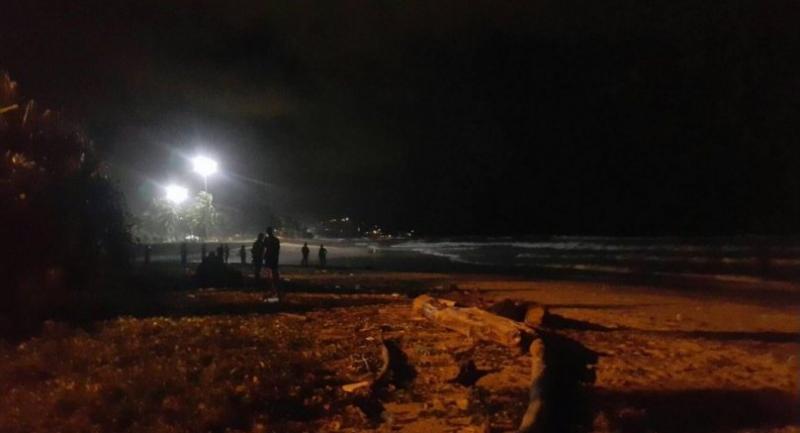 Phuket’s latest elusive crocodile escaped being caught on Sunday off Karon Beach, the latest sighting since being discovered off Yanui and Nai Harn beaches on Wednesday when a fisherman said it tried to chase him.

Since then the crocodile has been taunting officials and professional crocodile catchers and making a slow trek north long the island’s west coast beaches – on Saturday at Kata Noi and then Kata. On Sunday, was sighted, with ongoing attempts to capture it, at Karon Beach.

The crocodile was seen early on Sunday morning lying on the beach at Karon.

Karon Deputy Mayor Ittipohn Sangkaew said, “We didn’t see this crocodile on Kata and Karon beaches yesterday. But very early this early morning at 3.30am, we were notified that the crocodile came out of the water and was on the sand at Karon Beach.” A specialised team from Surat Thani rushed to the beach to catch the elusive beast, said Ittipohn. “They tried to throw a net at the crocodile but failed to snare the reptile. Their attempts failed several times. The crocodile immediately went back into the water.”

Over the week “we have seen the crocodile in the water several times,” said the deputy mayor. “Every time it comes out of the water we try to catch it.

“We have seen the crocodile about four times in the water. Swimmers have been prevented from going into the sea at Karon Beach” on Sunday.