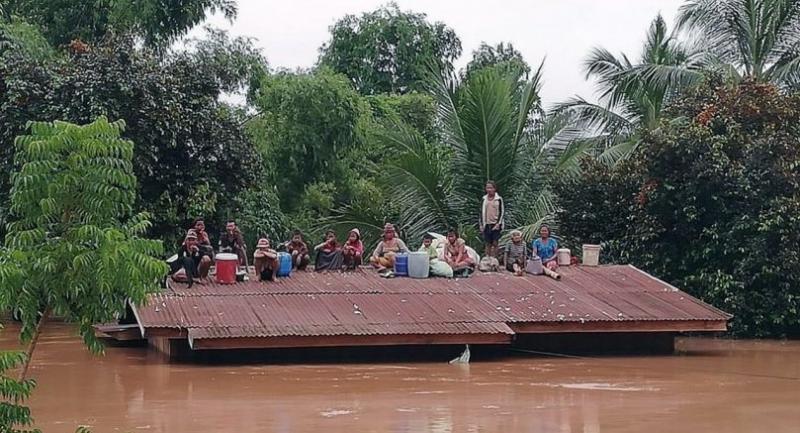 Lao villagers are stranded on a roof of a house after they evacuated floodwaters after the Xe Pian Xe Nam Noy dam collapsed in a village near Attapeu province, Laos on July 24.//EPA-EFE

Laos' Prime Minister Thongloun Sisoulith suspended his Cabinet meeting on Tuesday after an under construction saddle dam of the Xe-Pian Dam in the Southern province of Attapeu collapsed in heavy rains, causing flooding of hundreds of households and a massive evacuation effort, according to the Laos News Agency (KPL).

The PM, his cabinet members and other senior officials went to nearby Sanamxay to monitor the rescue and relief efforts underway for flood victims.

Being built by the Xe-Pian Xe-Namnoy Power Company (PNPC), the 410 MW Xe PianXe Namnoy hydroelectric power project is located in the southern region of the Lao PDR and is estimated to annually generate energy of approximately 1,860 GWh, according to www.powertechnology.com.

The project, which is estimated to cost US$1.02 billion (Bt34.1 billion), is the first build-operate-transfer (BOT) project to be undertaken by South Korean companies in Laos.

The feasibility study for the hydroelectric project was completed in November 2008. Construction of the project began in February 2013 and commercial operations were expected to begin in 2018.