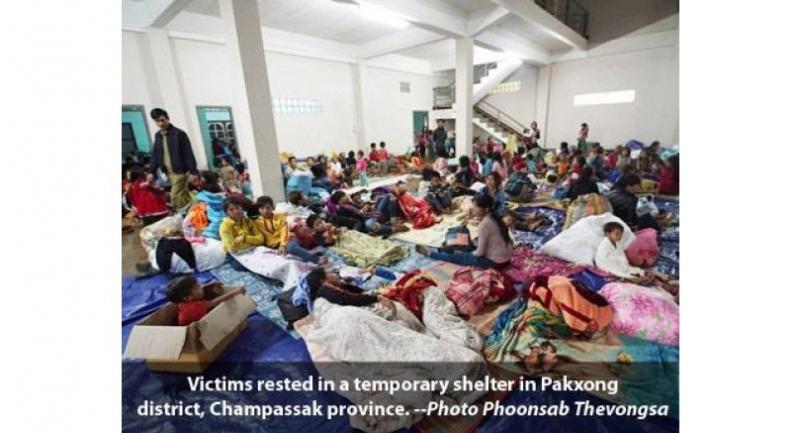 An official from Xe Pian Xe Namnoy Power Company has agreed the firm will take the fullest responsibility under the law and as per its concession agreement for the impact of its saddle dam D collapse following the record flood and destruction in Sanamxay district, Attapeu province.

The move comes as Minister of Energy and Mines, Dr Khammany Inthirath confirmed the company would not be in a position to deny its responsibility for the flood, which caused massive destruction to the livelihoods and property of the people in Sanamxay district.

"Regarding the compensation matter, I would like to reassure based on the concession agreement, all incidents are related to the dam construction, must be borne by the project developer 100 percent," he told a press conference in the capital on Thursday.

Xe Pian Xe Namnoy Power Company has not made any public and official statements over the incident as yet.

Many are awaiting the company to react to public opinion and fully express a sense of deep responsibility and accountability for the floods that have set new historical records in their height and extent and in terms of loss of life and livelihoods.

A senior official from the company told Vientiane Times that the firm was ready to handle the incident following the concession agreement and related laws, adding that the company would not be attempting to deny its responsibility for the flood and its consequences.

"We will take responsibility for the incident in accordance with laws. Of course, this is undeniable.

“However, I am not able to provide the detail of the compensation," the company official said, adding that the company had confirmed this position to the top government leaders at central and provincial levels.

Mr Khammany said that a primary mission of the government and project developers and related agencies following emergency rescue and relief would be to concentrate on the recovery of the livelihoods of the people who had been affected by the collapse of the dam.

He said the rehabilitation mission would be divided into two phases.

The first short-term phase to focus on the rescue of the flood victims and provide emergency relief while the long-term phase would pay attention to the reconstruction of resettlement villages, which includes the provision of accommodation and access to lands for people to earn a living.

He said that funding of all the rehabilitation work would be the responsibility of the project developers.

A number of people have expressed their opinion that the government and the dam developers must think about how to rehabilitate the flood victims, not solely in accordance with the letters of the concession agreement and under the law, but also from a social justice perspective.

Many are seeking a clear plan to support those people including children whose family members lives were lost in the flooding.

The support should include the provision of educational funds for those in need.

The Ministry of Energy and Mines' Energy Department Director General, Mr Xayphaseuth Phomsoupha said that it was too soon to outline the details of a compensation package, adding that the thorough review of the dam failure’s cause and damages under the concession agreement would have to be made first.

"There is a lot of detail in the concession agreement, so we have to review it before we can say precisely how much responsibility the company should take," he told Vientiane TImes by telephone from Tasmania, Australia.