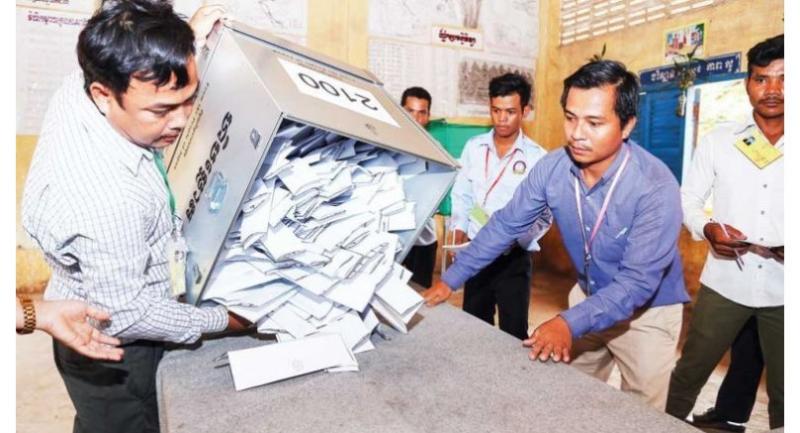 Even before the National Election Committee (NEC) had announced the official results of Sunday’s national polls, the ruling Cambodian People’s Party (CPP) said on Monday that it had managed to secure more than 77 per cent of the popular vote.

This would enable it to wrest total control of the 125-seat National Assembly.

The election body said that preliminary figures indicated that voter turnout for the elections was 6,885,729 or more than 82 per cent of the total 8,380,217 registered voters in the Kingdom.

The NEC is expected to announce the preliminary results on August 11, followed by the final tally on August 15.

As the results are being processed, leaders from the opposite ends of the political spectrum appeared to agree with CPP figures, despite having some reservations on how the polls were conducted.

CPP spokesperson Sok Eysan told The Post on Monday that the party had won 77.77 percent or “nearly 100 percent” and would dominate the National Assembly. This would be the party’s largest victory since the Kingdom’s maiden elections in 1993.

“The results will give the CPP a landslide victory in the National Assembly. We can get nearly all of the 125 seats,” he said. Eysan said political parties had no authority to announce the number of seats they believed they had won, but according to the NEC’s unofficial calculations, the ruling party had won comfortably and no other party could win a single seat.

“According to the figures obtained by other parties, I know that the CPP will overwhelmingly win the National Assembly."

“As for the others, the maximum support was only 5.6 per cent [of the votes], and that is not enough for even a single seat,” he said.

The victory, Eysan said, was “beyond expectations” for the CPP, one that merely reflected the fact that the people continued to support caretaker Prime Minister Hun Sen to lead the country and backed his nationaldevelopment agenda.

Grassroots Democratic Party (GDP) secretary-general Sam Inn said his party was not satisfied with the election results but would respect the voters’ decision.

“We separate the election process into two phases. The first phase started at the end of last year, where there were many challenges.

“This includes the dissolution of the Cambodian National Rescue Party [CNRP], threats made against civil society organisations and restrictions imposed on journalists’ freedom. However, we acknowledged all these and still decided to be part of the election process. We did our best,” he said. Hun Sen shows his inked-marked finger after casting his vote during the general election as his wife Bun Rany (left) looks on in Phnom Penh on Sunday. Heng Chivoan

As for the election campaign, election day and counting of the ballots, Inn said it generally went smoothly despite the GDP facing some challenges.

“We accept the election results, even though we are not content with it … we will respect the people’s decision."

“The Grassroots Democratic Party will continue its work to inculcate a new political culture, and we will start with nearly all communes that we won through the ballot. We will continue our mission,” he said.

Echoing a similar view, Khmer Will Party (KWP) president Kong Monika said he too believed the figures disclosed by the CPP and the party has no plans to stage any protest to rebut the election results.

“KWP believes that the election process was acceptable but we do not believe it entirely, because we did not have party agents (at polling stations) and are waiting for the final results from the NEC.

“I believe the votes KWP received are from genuine supporters who voted without threats from any politician,” he said.

But FUNCINPEC took a different stance. Its spokesman Nheb Bun Chin yesterday denied commenting on whether his party would accept or deny the election results. “I am doing my work. I will not comment and speak to journalists at all,” he said.

On the other hand, CNRP issued a press statement yesterday claiming that the election was the “death of democracy” in Cambodia and the start of “a new dark day in history”.

“Without the party of their choice, millions of Cambodian voters were left with no choice other than to boycott the elections. They live in fear with constant threats and intimidation by the ruling party to coerce them to vote,” said the statement.

Nineteen other parties also contested in the election.