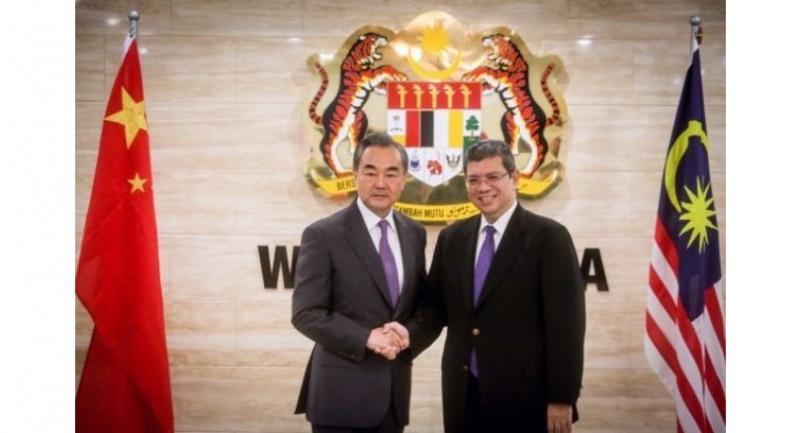 China has expressed confidence that Malaysia will prosper under the new administration led by Prime Minister Tun Dr Mahathir Mohamad.

China's state councillor and minister of foreign affairs Wang Yi, during his first official visit to Malaysia, also said relations between the two countries will reach new highs under the present government.

"We are happy to see that since the assumption of office by Prime Minister Dr Mahathir, in keeping with the wish of the people, there has been new dimensions being opened up in the national development of Malaysia.

"As Malaysia's good friend, China is happy to see these achievements that Malaysia has made and we have confidence that under Dr Mahathir's leadership, Malaysians will stay united and will achieve new glories.

Wang, who is on a two-day official visit to Malaysia, will also call on Dr Mahathir on Wednesday.

With Dr Mahathir's scheduled visit to China looming, Wang said his own visit to Malaysia was also to prepare for the event.

"The prime minister is an old and good friend of the Chinese people.

"We dearly cherish what he has built over the years and we believe during his visit there will be stronger mutual trust built between leaders of our countries," said Wang.

Meanwhile, Saifuddin said the two had discussed several bilateral issues such as its ongoing bilateral cooperation in areas of trade and investment, education, tourism, agriculture and security.

"As a trading nation and a pro-business government, I assured his excellency that Malaysia welcomes China's participation in our economy development, as long as they are aligned with Malaysia's national interests and are carried out based on principles of equality and mutual respect," said Saifuddin.

The minister added that on the South China Sea issue, both countries have agreed on the importance of maintaining peace and stability in the region.

"Disputes should be addressed through peaceful means, including through regional dialogue and discussions amongst the parties concerned, without resorting to threats or the use of force," he said.