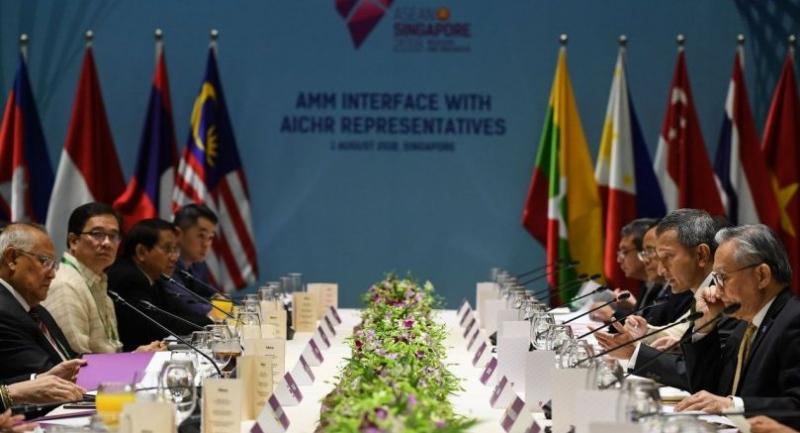 Issues regarding Myanmar’s Rakhine state, while lengthily addressed in a joint communique by Asean foreign ministers on Thursday, was however “not on the agenda” during their meetings up till Friday, according to Philippine Foreign Secretary Alan Peter Cayetano.

“As a courtesy and as a brother, [Myanmar International Cooperation] Minister Kyaw Tin always updates us on moves being done now,” Cayetano told the press prior to attending meetings with Asean partners on Friday.

“[He also updated] on what they are ready to do on the independent commission that they formed,” he said, referring to the reputedly independent body of inquiry freshly announced on Monday by the Myanmar government.

Cayetano added that dealing with humanitarian issues can trigger a desire to help those who are suffering, but “sometimes problems are too complex”.

Malaysian Foreign Minister Saifuddin Abdullah, meanwhile, noted that some “forward-moving” developments will emerge from the meetings.

“We are pleased to see the Myanmar government is engaging with [the findings of ] Kofi Annan’s advisory commission on Rakhine state,” Saifuddin said. “Malaysia is always firm on Rakhine state issues and we need to find solutions.”

Malaysia is one of a very few prominent voices within Asean to speak up for the Rohingya minority in ongoing government purges, including the latest in which the Myanmar military’s actions caused over 700,000 mainly Muslims to flee from their homes in northern Rakhine state.

The issue was discussed behind closed doors on Thursday during the Asean Foreign Ministers’ meeting before a joint communique was finalised later on the same day.

The detailed discussion of the Rohingya issue can be considered exceptional, considering that the majority of Asean countries often regard the conflict as a “domestic matter” for Myanmar.

“We underlined the importance of the expeditious commencement of the voluntary return of displaced persons to Myanmar in a safe, secure and dignified way without undue delay, and stressed the need to find a comprehensive and durable solution to address the root causes of the conflict and to create a conducive environment so that the affected communities can rebuild their lives,” it says.

However, the earlier version of the joint statement draft as seen by The Nation merely “urged” Myanmar to continue implementing recommendations of the final report of Annan’s advisory board.

In the final version, meanwhile, Asean ministers “welcomed the progress made by the government of Myanmar in implementing the recommendations of the final report. … And encouraged Myanmar to continue to implement the remaining recommendations.”