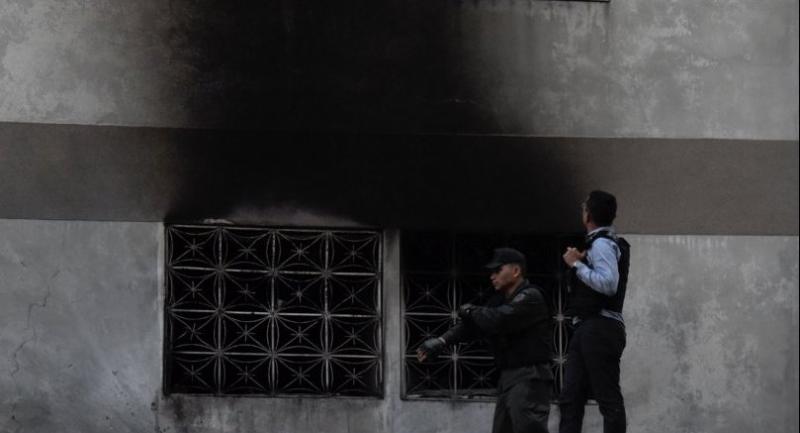 Security forces check a building after an explosion was heard during a ceremony attended by Venezuelan President Nicolas Maduro in support of the National Guard in Caracas on August 4, 2018. // AFP PHOTO

Venezuelan President Nicolas Maduro said he was "more determined than ever" after he escaped an "assassination" attempt using an explosive-laden drone as he gave a speech during a Caracas military parade.

The government said seven soldiers were wounded in the alleged attack Saturday, blamed on Colombia by Maduro and later claimed by a mysterious rebel group. Screengrab taken from a handout video released by Venezuelan Television (VTV) showing Venezuelan President Nicolas Maduro (C), his wife Cilia Flores (L) and military authorities reacting to a loud band during a ceremony to celebrate the 81st anniversary of the National Guard in Caracas on August 4, 2018.  // AFP PHOTO

"I am fine, I am alive, and after this attack I'm more determined than ever to follow the path of the revolution," Maduro said defiantly of the incident, from which he escaped unharmed.

"Justice! Maximum punishment! And there will be no forgiveness," he warned in an address to the nation, sparking fears of an anti-opposition offensive in a country already reportedly holding some 248 political prisoners.

Meanwhile, Attorney General Tarek William Saab, also present at the parade, said those arrested in connection with the incident would be identified on Monday.

"There will be a ruthless punishment," he said.

Venezuelan state television images showed Maduro looking up disconcertedly in the middle of a speech having heard a bang, before members of the country's National Guard lined up in the parade suddenly scattered.

"It was an attack to kill me, they tried to assassinate me today," he said in a state broadcast, speaking of a "flying object (that) exploded in front of me."

Communication Minister Jorge Rodriguez said there was "an explosive charge... detonated close to the presidential podium" and in several other spots along the parade held in central Caracas. Saab told CNN he saw a drone filming the event explode.

No drones could be seen in the television broadcast, which showed bodyguards jumping in front of Maduro to protect him with flexible ballistic shields. The broadcast was quickly cut.

Meanwhile, a policeman who requested anonymity told AFP that drones may have been released from a nearby apartment that suffered a fire after one exploded. However, other versions of events attributed the fire to the accidental explosion of a gas cylinder.

The government pointed the blame at "the ultra-right wing" -- its term for the opposition. Screengrab taken from a handout video released by Venezuelan Television (VTV) showing uniformed military members breaking ranks and scattering after a loud bang was heard during a ceremony to celebrate the 81st anniversary of the National Guard in Caracas on August 4, 2018. // AFP PHOTO

But Maduro himself said: "I have no doubt that the name (outgoing Colombian President) Juan Manuel Santos is behind this attack."

He added investigations pointed to financial backers who "live in the United States, in the state of Florida. I hope that President Donald Trump is ready to fight these terrorist groups."

The Colombian foreign ministry denied involvement, saying the allegations were "absurd" and "lacked any foundations."

Meanwhile, late Saturday, a civilian and military rebel group calling itself the "National Movement of Soldiers in T-shirts" claimed responsibility for the explosion.

"It is contrary to military honor to keep in government those who not only have forgotten the Constitution, but who have also made public office an obscene way to get rich," the group said in a statement passed to US-based opposition journalist Patricia Poleo, who read it on her YouTube channel.

"If the purpose of a government is to achieve the greatest amount of happiness possible, we cannot tolerate that the population is suffering from hunger, that the sick do not have medicine, that the currency has no value, or that the education system neither educates or teaches, only indoctrinating communism," the statement added.

The parade Maduro attended marked the one-year anniversary of the Constitutional Assembly, a legislative body packed with loyalists that arrogated powers from the opposition-ruled National Assembly. Maduro has remained in power in oil-rich Venezuela despite a collapsing economy and a long-running political crisis that has seen the country isolated internationally.

Hundreds of thousands of Venezuelans have fled due to food and medicine shortages and hyperinflation that could reach one million percent this year, according to the International Monetary Fund.

Maduro, a 55-year-old Socialist leader who took over from his late mentor Hugo Chavez in 2013, has effectively sidelined the fractured opposition through control of the courts and the electoral body -- and undinting support from the military, which holds key posts in his government.

After the explosion, he ordered the military to be on "maximum alert."

He also warned the opposition that investigations will get to the bottom of the alleged attack, "whoever falls" in the process.

Maduro often accuses the opposition and the United States of working together to foment a "coup" to topple him.

This year he brought forward to May presidential elections -- boycotted by the opposition -- which handed him a new six-year term.