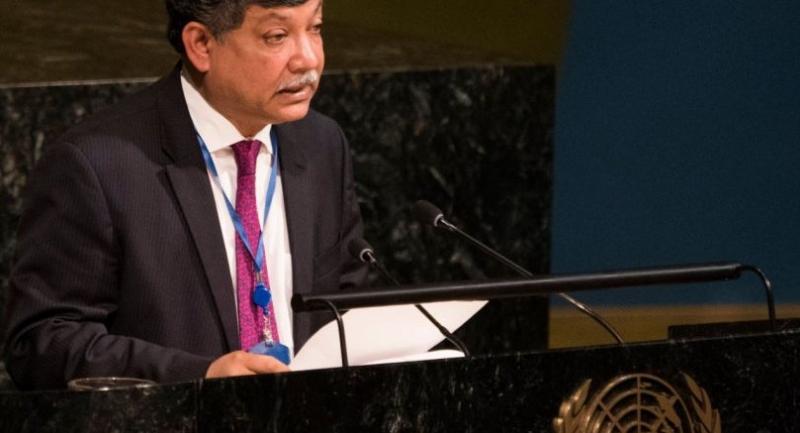 AFP file photo: Myanmar has not made any demonstrable effort to address the concerns of the Rohingyas and the international community: BANGLADESH AMBASSADOR TO THE UN MASUD BIN MOMEN

By The Daily Star
Dhaka

The United Nations said Myanmar has not yet granted its staff independent and effective access to Rakhine, though two months have passed since the signing of a deal on helping the country create conducive conditions for Rohingya repatriation.

"On 14 June, UNHCR and UNDP submitted travel authorisation requests for international staff to be based in Maungdaw and to start their work in the northern part of Rakhine State, and are waiting for a response from the government [of Myanmar] to these requests," said UNHCR, UN Refugee Agency, and UN Development Programme in a joint statement yesterday.

The UN agencies said effective access requires being able to consult, freely and independently and on a day-do-day basis, with communities in Rakhine about their needs. It also necessitates a predictable, flexible and simplified procedure to approve travel authorisations within a reasonable period of time for UNHCR and UNDP staff to go to the areas where these communities reside.

"These are basic criteria for enabling us to carry out our work in the areas of Rakhine State covered by the MoU," said the UN, urging Myanmar authorities to make tangible progress to improve conditions in Rakhine.

Meanwhile, Bangladesh has accused Myanmar of failing to tackle the concerns of over 1 million Rohingyas, including the 300,000 who fled earlier violence, and urged the UN Security Council to take action to ensure their safe return to Myanmar, reports AP.

Over 720,000 Rohingyas fled a military campaign in Rakhine since late August last year that has been defined by the UN as ethnic cleansing. Myanmar military is accused of killing, raping, looting and burning Rohingya houses in Myanmar.

Myanmar inked a bilateral repatriation deal with Bangladesh in November last year. On June 6 this year, it signed a tripartite MoU with UNHCR and UNDP on Rohingya repatriation.

The MoU with the UN agencies is considered a first step towards making conducive conditions for Rohingya repatriation in Rakhine.

The UN agencies said Myanmar government has taken some encouraging steps since the MoU was signed, including formation of a tripartite Technical Working Group to support the implementation of the MoU; enabling an important visit by senior UNHCR and UNDP officials to the northern part of Rakhine in early July; and facilitating an initial joint field visit to Rakhine by the Technical Working Group mid-July.

"However, substantial progress is urgently needed in three key areas covered by the MoU: granting effective access in Rakhine State; ensuring freedom of movement for all communities; and addressing the root causes of the crisis," the statement said.

"In particular, local orders severely restrict their freedom of movement. These restrictions prevent Rohingya communities from being able to work, go to school, and access healthcare. They also prevent them from being able to interact with friends, family, and other communities in Rakhine State," the statement mentioned.

The root causes need to be addressed by implementing the recommendations of the Advisory Commission on Rakhine State, including a clear, voluntary and equal pathway to citizenship for all eligible individuals, the UN agencies said.

In another development, Bangladesh's UN Ambassador Masud Bin Momen in a letter to the UN Security Council circulated Tuesday said while Bangladesh continues to engage with Myanmar "in good faith" on arrangements to return the Rohingyas, "we regret that the necessary conditions for safe and sustainable return do not exist in Myanmar," AP added.

"Nor has Myanmar taken any demonstrable effort to address the concerns of the Rohingyas and the international community," Momen said, calling upon the Security Council to adopt a resolution and take "concerted and determined action to address the Rohingya crisis".