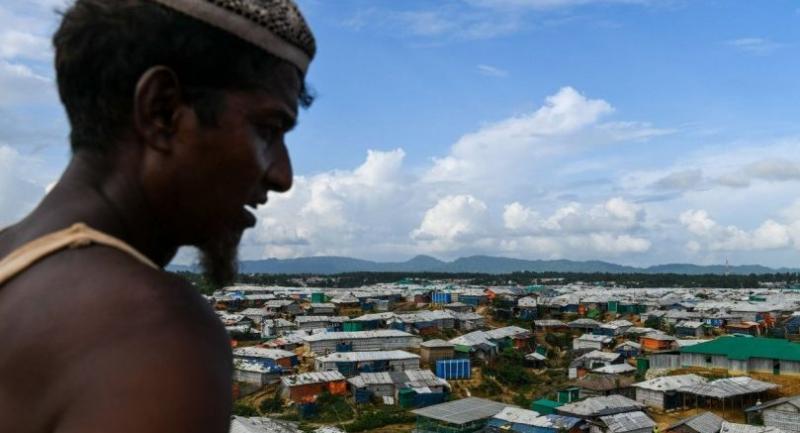 A Rohingya refugee looks on as the Kutupalong camp is seen on the background in Ukhia on August 8, 2018. (Photo by CHANDAN KHANNA / AFP)

Myanmar Thursday said the International Criminal Court (ICC) has no jurisdiction to run a case on atrocities against Rohingyas.

"Myanmar is not party to the Rome Statute and the Court has no jurisdiction on Myanmar whatsoever," said Myanmar's Ministry of the Office of the State Counsellor in a statement.

The ICC, Myanmar said, has the jurisdiction to prosecute individuals for the international crimes of genocide, crimes against humanity and war crimes.

It came up with the observations as the ICC wanted to know Myanmar's opinion on whether The Hague-based court has jurisdiction to run the case.

Myanmar came with its decision at a time when a high-level delegation led by Foreign Minister AH Mahmood Ali is on a four-day visit to Myanmar to discuss progress on Rohingya repatriation with Myanmar leadership.

The Bangladesh delegation comprising members of joint working group formed earlier for repatriation of Rohingyas living in Bangladesh will see what steps Myanmar has taken so far for creating conducive environment for safe return of Rohingyas.

Minister Ali is likely to go to Northern Rakhine apart from holding meetings with the Myanmar leaders, another official told UNB.

After Bangladesh, the ICC now wanted to know Myanmar's opinion on the matter.

The pre-trial Chamber of the ICC invited the competent authorities of Myanmar to submit written observations, either publicly or confidentially, on three specific matters by July 27, a senior official told UNB.

But Myanmar has declined to engage with the ICC by way of a formal reply showing some reasons.

Myanmar said the request by the prosecutor may be interpreted as an indirect attempt to acquire jurisdiction over Myanmar which is not a State Party to the Rome Statute.

"Myanmar, as a non-State Party, is under no obligation to enter into litigation with the prosecutor at the ICC or even to accept note verbales emanating from their registry," reads the statement.

It said Myanmar is concerned with the lack of "fairness and transparency" of the ICC proceedings.

Earlier, Bangladesh opted for 'confidential' mode of submission to the International Criminal Court (ICC) on Rohingya issue which it thinks as a testimony of its 'keenness to seek bilateral solution' to this problem.

Prime Minister Sheikh Hasina, globally known as 'Mother of Humanity' for her courageous move and generous support to the victims of ethnic cleansing from Rakhine state of Myanmar, was left with no option but to act as per tenets of its history and spirit of humanity," a Foreign Ministry source told UNB.

Bangladesh concurred with both the territorial jurisdiction as well as the claim of forcible deportation of Rohingyas as Bangladesh believes in 'establishing accountability for the atrocities' committed against the Rohingya people from Myanmar.

As a State Party to the ICC, Bangladesh is obliged to follow the court's requests and suggestions.

International pressure on Myanmar is mounting afresh as it remained 'very slow' in creating conditions for the safe return of Rohingyas from Bangladesh.

Earlier, Bangladesh, being one of the State Parties to the Rome Statute, responded to the request of the ICC regarding the Rohingya situation, particularly about the territorial jurisdiction of the ICC as Bangladesh is seeking a "sustainable solution" to the crisis.

A diplomat in Dhaka said in 1993 when the International Criminal Tribunal for the Former Yugoslavia was established, few believed that suspects like Ratko Mladic and Radovan Karadzic, the Bosnian Serb leaders, would ever have to account for themselves.

Analysing the current situation, another diplomat said, "Time is quite right for history to repeat itself."