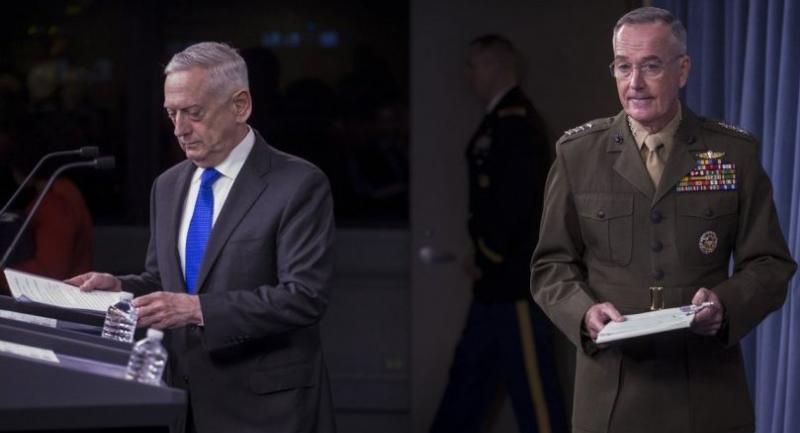 U.S. Secretary of Defense James Mattis, left, and Chairman of the Joint Chiefs of Staff Gen. Joseph Dunford, right, arrive before holding a press briefing at the Pentagon August 28, 2018 in Arlington, Virginia./AFP

The Pentagon has stepped in to add pressure on North Korea for its refusal to advance the denuclearization process.

Secretary of Defense James Mattis on Tuesday indicated that the United States will resume key joint military drills with South Korea if the North remains recalcitrant despite the June 12 Singapore summit agreement.

"We took the step to suspend several of the largest exercises as a good-faith measure coming out of the Singapore summit. We have no plans at this time to suspend any more exercises," he told reporters at the Pentagon.

The secretary's remarks reflect a palpable sense of frustration among US officials over Pyongyang's recent attitude.

A top North Korean negotiator, Kim Yong-chol, recently sent a letter to Pompeo, according to The Washington Post. CNN cited sources as saying that Kim warned in the letter that denuclearization talks are "again at stake and may fall apart."

The North has arduously demanded the declaration of an end to the 1950-53 Korean War.

The Trump administration, however, wants the North to submit a list of its nuclear arsenal first.

The US views the suspension of major military exercises with South Korea as a main incentive for the North.

Mattis made clear that, "We suspended several of the largest exercises, but we did not suspend the rest." He added the US has no plan to suspend more drills any more.

Asked repeatedly to elaborate on the next steps, he said, "We are going to see how the negotiations go, and then we will calculate the future, how we go forward."

He again pointed out the military's focus, for now, is to support diplomats leading the campaign to rid the North of its nuclear weapons.

Mattis left room for flexibility, as Pompeo is still committed to engaging with Pyongyang.

"America stands ready to engage when it is clear that Chairman Kim (Jong-un) stands ready to deliver on the commitments that he made at the Singapore summit with President Trump," Pompeo said in a statement.

His spokesperson, Heather Nauert, also said the US will be patient in the ongoing diplomatic effort.

"This wouldn't be easy from the start, and it would be, could be a somewhat lengthy process," she said at a press briefing. "Overall, sometimes we move forward; sometimes we stand right where we are. The president, overall, remains very clear-eyed about the challenges and difficulties ahead of us."

She stressed that the cancellation of what would have been Pompeo's fourth trip to the North as the chief US diplomat was a decision based on discussions by the "entire national security team."

In their judgment, Nauert said, they determined that now is not the right time to make the trip and Trump agreed with that.

She would neither confirm nor deny the news report of the North's letter to Pompeo.

Asked if a new round of inter-Korean summit talks, slated for September, should be called off as well, she recalled South Korean President Moon Jae-in's talk of the need for denuclearization.

"Also, part of this is having conversations with the South Koreans and our allies," she said.

Meanwhile, Dunford said the US is continuing air and maritime operations to disrupt ship-to-ship transfers of fuel in violation of U.N. sanctions against the North.

His comments came amid growing concerns about loopholes in the sanctions.